Although these festivals can be a bit stressful because everyone has to fly in, it's usually great when you're arriven and everyone is settled in. This seemed to be no exception. The sun was chirping, the birds were shining, people were getting drunk, in short, a heavy metal festival.

I met Sami Jylhä, friend, band friend and sometimes-finnish-merch-guy, on the night before the first festival day (I went to the site because I was looking for some food..) Here Sami is explaining how happy he is to be here and how the horrors of meeting my brother here last year is still sending shivers up his spine...

I went up quite early (well, 10 in the morning <g>) the next day (August 4th) to check out some of the bands and get in the festival mood. Here it's Vader, a Polish death metal band, that take the Black Stage.

The VIP tent is usually a somewhat fun place to hang. At this time of day, VIP stands for Very Impotent People. Here's Flavio enjoying a cigarrette while inspecting this year's batch of impotent people.

Here's the keyboardist André "the BEAST" Anderssen and drummer of Royal Hunt during their set on the True Metal Stage (I'm not kidding, that was the name of the stage.)

The catering on the 4th was quite OK, Mexican food! Here's Jukka pigging out on what looks like.. well.. like a Taco or something.

Here's my half-eaten plate of Mexican-German food. Wacken, as you may know, is in Northern Germany close to the Danish border (about an hour north of Hamburg.) Somewhat impressive!

It was also great seeing the Rhapsody guys again. We spend almost two months on tour together in the spring of 2000. At that time, Luca Turilli (guitar) was a non-drinker. But here in this picture, he's having a beer before going on stage. BEFORE GOING ON STAGE! Going on tour with scandinavians can be dangerous... just check out what happened to poor André Matos of Angra.

Here's the audience as seen from the left PA stack during Rhapsody's set. Our audience was bigger!!! <g>

Here's Luca on stage, imploring the audience to loosen up, rock out, drop in, throw up, turn out, and tone up.

Here's Jukka frantically making late-minute adjustments to a microphone behind the stage. Maybe if I move it one millimeter to the right I can compensate for the 0.35 dB loss in the third midrange box from the top of the left PA stack!?

Jörg late-minute fiddling with the drums. I wonder, if I tighten the right bass drum head to where it almost breaks, could that make it break 10 seconds into the first song!? Ooops, Jörg!! <g>

Here's Alex Holzwarth of Rhapsody trying to confuse his bandmates with a set of eighth-note-septuplets over the toms. (Old trick!)

Alessandro Lotta and Alex Staropoli, also of Rhapsody. (If you put your face 15 centimeters from the screen and stare very closely to the picture for 45 minutes an apparition of singer Fabio Lione will appear.)

Mighty Warriors in the audience, crossing swords! I hope they were plastic..

Jörg catching some sun in the grass outside the dressing rooms.

Hanging outside the production office

The production office is the nerve centre of any festival area. Because of that, there's a constant flow of interesting characters passing by, making it an excellent place to kill a few minutes. In Wacken 2000, it was also situated nicely in the shade. Here's Jukka quite obviously enjoying the sight of Schlanky on a bicycle.

Here's Martin M, who was stage managing the party stage if I remember correctly, enjoying whatever natural-high-of-the-minute he has in his vast arsenal. (I don't think there's a more positive person in existence.. can I please have some of what this guy is on!? <g>)

The view from inside the production office. It was quite small! Note LSD dispenser in background, cleverly disguised as water bottle. LSD enables the Wacken staff to have a new level of understanding of the prettily color-coded access wrist bands..

A.C. and Gerald. "Funny thing, we told all the bands that the ticket price was 10 deutschmarks so we have 3 million extra lying around. Want some?"

Schlanky, refreshed after his bike ride.

You don't have to wait long outside the Prod.Off. for someone interesting to swing by. Here's one of the guys from the band Immortal (they're from Norway), ready to take posession of the Black Stage.

If you're not Immortal, you're a mere mortal. Don't you forget it!

Here's some more Immortals. I didn't catch their set, but I'd say chances are pretty slim they played any polkas or easy listening MOR hits!! <g>

Here's Olivier Garnier, our French label head and marketing wizard, with what I can only interpret as an expression of intense disbelief at the levels of barbarism sometimes encountered in the wastelands east of the Mosel river.

Tolkki looking thru one of his patented "briefcases" (usually a plastic bag purchased for FIM 1.- in Valintatalo!!) That's how object transportation gets done WAY east of the Mosel. <g>

Here's Tolkki getting ready to shoot some video.

OK, so the moment arrives which separates the mice from the men. It's time to take the stage! Nobody expects anything out of the ordinary. It's a pretty lazy, sunny, hot late-summer day, not a cloud in the sky, everybody's looking forward to play and have a good time. We have a streamlined set and lots of pyro.

Then in the middle of the set, something goes terribly wrong.

At the beginning of the song SOS, Timo K goes to the drum riser to put a water bottle down. He puts it close to one of the pyro devices (a magnesium flash pod which has quite a lot of thermal energy but not so much pressure..) Markku-the-pyro-guy ignites it, either due to lack of attention or obstruction of his vision. This particular cue is when the double bass drums start in the song.

Timo's face and left hand is in very close proximity to the fireball. As a reward for his lack of respect for the pyro he gets second and third degree burns on two fingers and the back of his hand, a really funny hairdo, and a Hitler moustache. Luckily his eyes appear to have been closed due to reflex. He could easily have had a permanent and total loss of vision. Someone gaffatapes a bandage to his hand and he picks up the song on the second verse! (Some serious Viking blood in that Kotipelto!!) He goes to a hospital in Itzehoe (close to Wacken) directly after the show.... 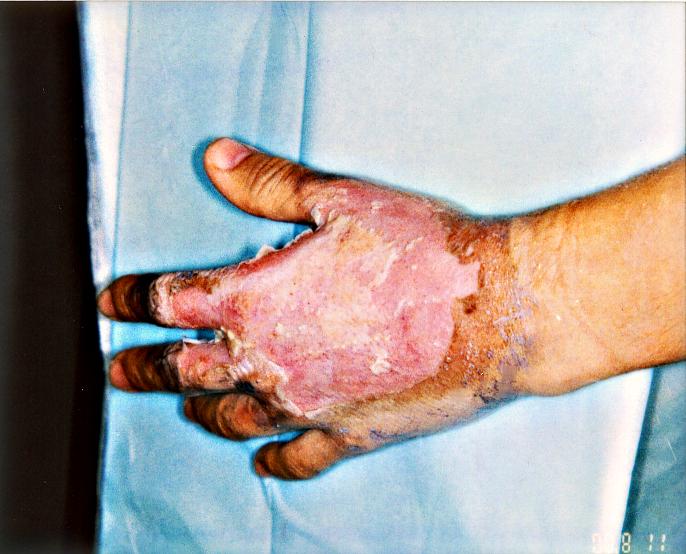 Timo's hand one week after the accident....
The doctors say that the hand will probably be 100% OK. But due to the very real risk of infection, we have had to cancel a bunch of gigs while it's healing...

Markku-the-pyro-guy is of course devastated. This is his first accident. It's hard to assign "blame" in a case like this, and it serves no purpose really. The crew did take care to not put any drinks on the drum riser due to the pyro. In an ideal world, accidents like this don't happen. But in the real world they do. I speak from experience — I once had a "concussion blast" go off 80 centimeters from my face myself, in 1991. It knocked me out for 10 seconds and I had to go to the hospital later, bu tthere was no pernn
nngggggg
öööööhhh gggghhhgggghhhh
manent damage (I think).

And Timo could have been a lot worse off. So no lawsuits or fired people. Hopefully the other "pyro greenhorns" (Timo T and Jari) in the band will have a lot more respect from now on. I think it's a safe bet that Timo K will...

Here is Markku-the-pyro-guy in the dressing room after the gig. Doesn't look too happy, does he!? <g> He soothes himself with some Absolut Vodka minutes after this, forgetting that he still has to climb up in the light rig to remove his pyro ignition cables...

That evening and the next, we all go check out some of the remaining shows. There were some great bands I've never seen before, notably Nightwish and Zakk Wylde. Morbid Angel were cool as well. And of course the obligatory checkup on the scene in the VIP tent.

Lots of Scandinavian people were backstage, all behaving in the manner proper for people from "east of the Mosel and north of the Kattegat". But it was difficult for me to get in a good mood...

Here are the lads from Sentenced. These guys know how to drink! (They're from Oulu, FInland)

I think VIP stands for "Very Intoxicated Person" in the evening.. Here's Ville from Sentenced preparing to take a little nap on the floor of the VIP tent. Perhaps it should be called the RIP tent!? <g>

The party's over, and here's Markku-the-pyro-guy after the van ride back to the hotel...

Check the strato site for more updates on Timo if you're curious.

If you like this sort of little inane photo expo, why not check out this other one.

Page updated Mar 29, 2004 at 00:10 • Email: jens@panix.com
All content copyright © Jens Johansson 2021. No unathorized duplication, copying, mirroring, pilllaging, archival, or redistribution/retransmission allowed! Any offensively categorical statements passed off as facts herein should only be construed as my very opinionated opinions.