The Canadian government has decided to pay Can$ 10 million to Omar Khadr.

To recapitulate the story, he was taken to Afghanistan by his father as a 15 year old, and then threw a grenade in a firefight that killed a US soldier.

He was taken into custody, tortured repeatedly, and eventually pled guilty, he was later repatriated to Canada, and then released on bail in 2014.

Khadr filed suit against the Canadian government for depriving him of his rights, and illegally treating as an adult while in detention, and now Canada has settled with him, paying him Can$10 million settlement:

A Canadian citizen, Khadr was captured in Afghanistan in 2002 at age 15 after a firefight with U.S. soldiers. He pleaded guilty to killing a U.S. Army medic and became the youngest inmate held at the military prison in Cuba.

Khadr later recanted and his lawyers said he had been grossly mistreated. In 2010, the Canadian Supreme Court ruled that Canada breached his rights by sending intelligence agents to interrogate him and sharing the results with the United States.

The case proved divisive: defenders called Khadr a child soldier while the then-Conservative government dismissed calls to seek leniency, noting he had pleaded guilty to a serious crime.

The US took a child soldier and treated him as a criminal, they then tortured him abd coerced a confession out of him with the active support of the Canadian state security apparatus, a fact that Canada’s judiciary has repeatedly taken a dim view of.

This is a good thing, though I am not surprised that former PM Stephen Harper had to exit the scene for the right thing to be done.  Harper was to doing the right thing as Josef Stalin was to rule of law.

It’s nice that the Canadian government is doing the right thing.

It will never happen here, since Obama decided to normalize this behavior, (Looking forward, not backward) and then systematically promoted the people who aided and abetted crimes against humanity in the US state security apparatus. 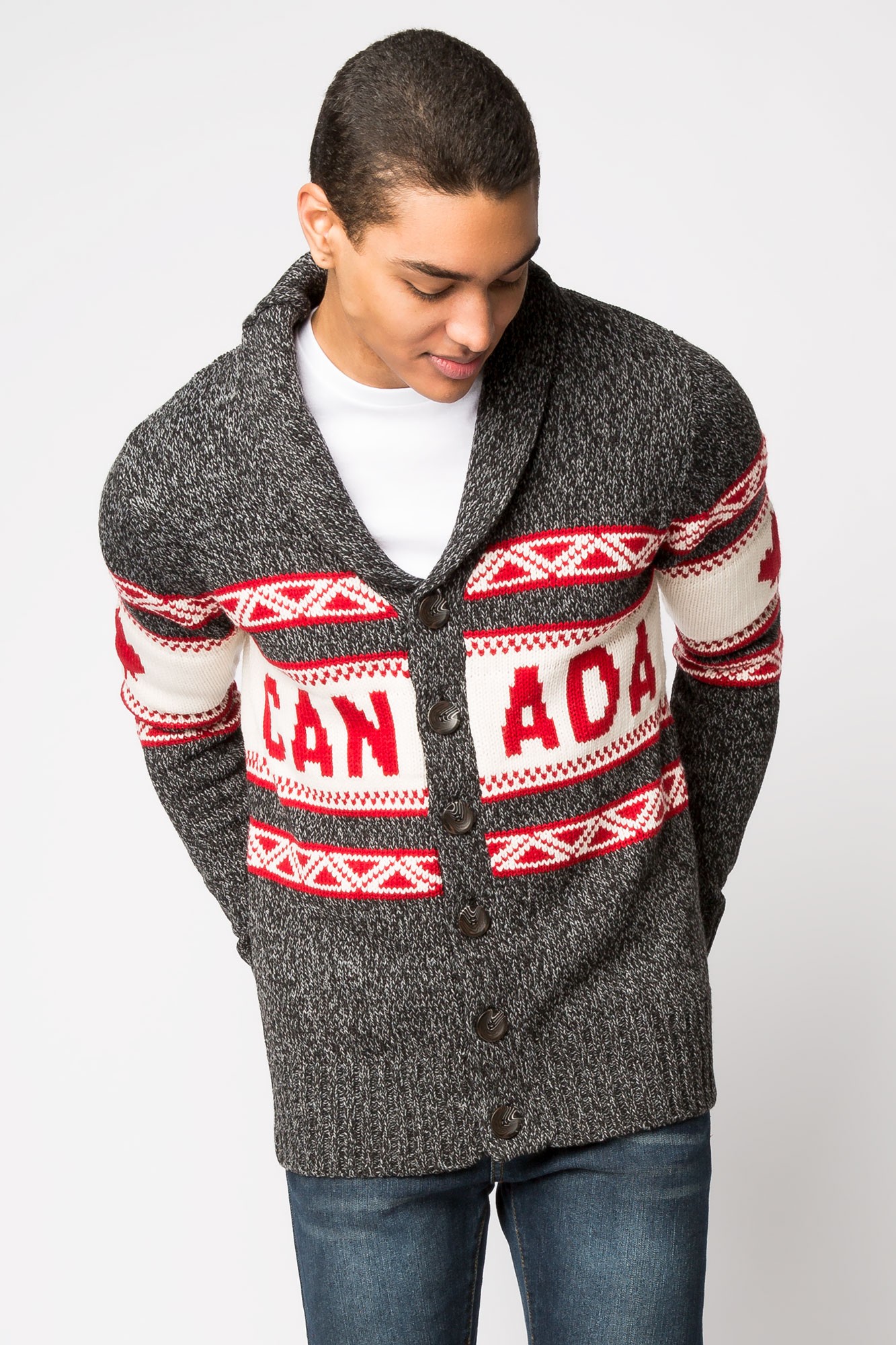 I was just listening to NPR, and they were talking about the Canada Day celebrations, which is a big deal because this is the sesquicentennial (150th year) since the founding of the Canadian Confederation.

There was a mention of security precautions being taken, and mention was made of an, “Elite Canadian Anti-terrorism Unit,” (This would probably be JTF2) being on alert as a precaution. (No mention of any specific threats.)

I know that this is rank stereotyping, but the image that came into my head was of a bunch of guys in cardigans apologizing profusely.

This is clearly an inaccurate characterization of Canadian soldiers in general, but the image remains in my head.

Does this make me a bad person?

It appears that you cannot even find one non-Nazi Uke in Canada:

Exclusive: Canada’s fiercely anti-Russian Foreign Minister Chrystia Freeland says her Ukrainian grandfather struggled “to return freedom and democracy to Ukraine,” but she leaves out that he was a Nazi propagandist justifying the slaughter of Jews, writes Arina Tsukanova.It really says all you need to know.

So, it appears Freeland’s grandfather – rather than being a helpless victim – was given a prestigious job to spread Nazi propaganda, praising Hitler from a publishing house stolen from Jews and given to Ukrainians who shared the values of Nazism.

Among other things, as editor of the Polish newspaper Nowy Dziennik, he lauded the Babi Yar massacre of Kiev’s Jews:

The Nov. 6, 1941 issue of Krakivski Visti ecstatically describes how much better Kiev is without Jews. “There is not a single one left in Kiev today, while there were 350,000 under the Bolsheviks,” the newspaper wrote, gloating that the Jews “got their comeuppance.”

That “comeuppance” refers to the mass shooting of Kiev’s Jewish population at Babi Yar. In just two days, Sept. 29-30, 1941, a total of 33,771 people were murdered, a figure that does not include children younger than three years old. There were more shootings in October, and by early November, Krakivski Visti was enthusing over a city where the Jewish population had “disappeared” making Kiev “beautiful, glorious.” Chomiak’s editorials also described a Poland “iinfected by Jews.”

It should be noted that my awareness of the history of Ukrainian nationalism going back hundreds of years, might influence my positions on the current conflict in the Ukraine.

On the other hand, it appears that Freeland would Steve Bannon’s kind of foreign minister.

Fox and its ilk are continuing to proclaim that the terrorist who shot up a mosque in Quebec is a Moroccan, despite the fact that this is not true.

The  Mohamed el Khadir, who is of Moroccan extraction in this crime was the guy who called 911:

A mass shooting at a Quebec City mosque last night left six people dead and eight wounded. The targeted mosque, the Cultural Islamic Center of Quebec, was the same one at which a severed pig’s head was left during Ramadan last June. Canadian Prime Minister Justin Trudeau called the episode a “terrorist attack on Muslims.”

Almost immediately, various news outlets and political figures depicted the shooter as Muslim. Right-wing nationalist tabloids in the UK instantly linked it to Islamic violence. Fox News claimed that “witnesses said at least one gunman shouted ‘Allahu akbar!’,” and then added this about the shooter’s national origin:

White House Press Secretary Sean Spicer exploited the attack to justify President Trump’s ban on immigrants from seven Muslim-majority countries. “It’s a terrible reminder of why we must remain vigilant and why the President is taking steps to be proactive rather than reactive when it comes to our nation’s safety and security,” Spicer said at this afternoon’s briefing when speaking of the Quebec City attack.

But these assertions are utterly false. The suspect is neither Moroccan nor Muslim. The Moroccan individual, Mohamed el Khadir, was actually one of the worshippers at the mosque and called 911 to summon the police, and played no role whatsoever in the shooting.

The actual shooting suspect is 27-year-old Alexandre Bissonnette, a white French Canadian who is, by all appearances, a rabid anti-immigrant nationalist. A leader of a local immigration rights groups, François Deschamps, told a local paper he recognized his photo as an anti-immigrant far-right “troll” who has been hostile to the group online. And Bisonnette’s Facebook page – now taken down but still archived – lists among its “likes” the far right French nationalist Marine Le Pen, Islam critics Richard Dawkins and Christopher Hitchens, the Israeli Defense Forces, and Donald J. Trump (he also “likes” the liberal Canadian Party NDP along with more neutral “likes” such as Tom Hanks, the Sopranos and Katy Perry).

Clearly, we need to ban Katy Perry fans from entering the United States.

Police in Prince Edward Island have promised to arrest drunk drivers and take them into custody.

While they are being taken to the station, the police will make the detainees listen to Nickelback.

Wallonia caved, and in response to language that changes nothing about the deal, has authorized the Belgian government to sign off on the Comprehensive Economic and Trade Agreement (CETA) with Canada, including its irreversible privitization and ISDS provisions:

European Union leaders have expressed hope of signing a trade deal with Canada after Belgian politicians overcame differences that had been blocking the treaty.

The Belgian prime minister, Charles Michel, confirmed that leaders of five regional parliaments had reached an agreement with the federal government shortly after midday on Thursday. He tweeted:

The Belgian compromise – a four-page text that sits alongside the 1,600-page treaty – was approved by ambassadors from 28 EU member states on Thursday afternoon. Belgium’s regional parliaments are expected to endorse the text on Friday, paving the way for the deal to come into force on a temporary basis.

Expect to see higher drug prices, the end to the precautionary principle, the gutting of safety, employment, and environmental protections, and a growth in the most parasitic parts of the financial industry as a result.

The Walloonian Parliament just put a stake through the heart of the Canada/EU trade pact:

The EU’s once-mighty trade negotiators never dreamed that their powers would be stripped from them so unceremoniously — and possibly for good.

The Francophone parliament of the Federation of Wallonia-Brussels — only 10 minutes’ walk from EU headquarters — stands to win a place in history for sinking the EU’s landmark trade deal with Canada and potentially for scuppering the European Commission’s ability to lead the world’s biggest trade bloc for many years.

Failure to conclude the Comprehensive Economic and Trade Agreement (CETA) by this month’s deadline would be a devastating blow to the EU, which has spent seven years working on the tariff-slicing agreement with Ottawa.

The Federation of Wallonia-Brussels parliament, which focuses on the cultural and educational concerns of 4.5 million French speakers in Belgium, voted Wednesday evening to reject CETA because of worries about public services and agriculture. Laetitia Naklicki, a spokesperson for Minister-President Rudy Demotte, said this vote meant that the government of the French-speaking community “would not issue its full power for signing CETA to the federal government.”

Unless the Belgian central government can find an imaginative compromise quickly, the EU will be unable to corral the signatures of all 28 EU countries before an EU-Canada summit on October 27. The pressure on Belgian Prime Minister Charles Michel is only likely to increase Friday, when another regional assembly, Wallonia, also voted against CETA.

Under Belgium’s complex constitution, all five regional governments must approve the trade deal before the federal government can give consent.

The fact that these deals have become increasingly more difficult to pass, and as such will become far more limited in scope.

This is a good thing.

I really do hope that this is the start of a trend.

The increasing investment of authority in anti-democratic institutions has been a disaster for everyone but the elites staff, and directly benefit from, those institustions.