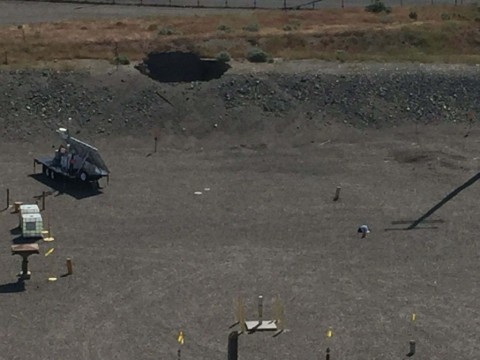 At one of the myriad of radioactive waste dumps in Hanford, Washington, a tunnel has collapsed:

Hundreds of workers at the Department of Energy’s Hanford nuclear site in Washington state had to “take cover” Tuesday morning after the collapse of 20-foot-long portion of a tunnel used to store contaminated radioactive materials.

The Energy Department said it activated its emergency operations protocol after reports of a “cave-in” at the 200 East Area in Hanford, a sprawling complex about 200 miles from Seattle where the government has been working to clean up radioactive materials left over from the country’s nuclear weapons program.

The agency said in a statement that the 20-foot section is part of a tunnel that is hundreds of feet long and is “used to store contaminated materials.” The tunnel is one of two that run into the Plutonium Uranium Extraction Facility, also known as PUREX. The section that collapsed was “in an area where the two tunnels join together,” the department said.

The PUREX facility, once used to extract plutonium from spent nuclear fuel, has been idle for years but remains “highly contaminated,” the agency said.
………

An August 2015 report by Vanderbilt University’s civil and environmental engineering department said the PUREX facility and the two tunnels had “the potential for significant on-site consequences” and that “various pieces of dangerous debris and equipment containing or contaminated with dangerous/mixed waste” had been placed inside the tunnels.

Former Energy Department official Robert Alvarez said that remotely controlled rail cars once carried spent fuel from a reactor to the PUREX chemical processing facility, which then extracted dangerous plutonium. He said the plant lies near the middle of the sprawling 580-square mile Hanford site and was “a very high-hazard operation.”

Many contaminated pieces of equipment, including the rail cars, have simply been left in the tunnels, he said. The Vanderbilt report said that there were eight rail cars in the older tunnel and 28 in the newer one.

The cave-in was discovered during “routine surveillance,” according to the Energy Department. Photographs showed a gaping hole, plainly evident because the tunnels are largely above ground.

Workers near the PUREX facility were told to shelter in place, and access to the area was restricted, according to the Energy Department statement. Officials requested that the Federal Aviation Administration put a temporary flight restriction in place, according to the FAA.

We still have billions of dollars of nuclear waste to clean up from the Truman administration.

Nuclear power is a suckers game.

Scott Pruit, environment hating wingnut and current head of the Environmental Protection Agency, is requesting a round the clock security detail in his next budget.

It appears that in addition to being a corrupt stooge of the energy industry, he’s also an abject coward:

The administrator of the US Environmental Protection Agency, historically, has had some measure of government-funded personal security detail. Agents routinely picked Gina McCarthy from the airport, for example, or accompanied her on site visits during her time as EPA administrator from July 2013 to Jan 2017. But Scott Pruitt, the new EPA chief, wishes to be guarded 24/7.

The Times calls it a first for an EPA chief, and notes that the 10 additional agents would more than double the agency’s current security staff, which has hovered between six and eight agents in recent years. Similarly, security detail for education secretary Betsy DeVos has reached unprecedented levels: Typically, the secretary of education is guarded by about six agents from within the Department of Education. Since her contentious confirmation, DeVos has been under the protection of the US Marshals Service, costing $8 million over eight months.

What security menace is Pruitt guarding against? According to Myron Ebell, who led Trump’s EPA transition team but is no longer employed by the administration, Pruitt is at risk from his own employees—and “the left.”

Seriously, the wingnuts spend their days soiling their pants in abject terror.

But this article sounds an awful lot like eco-socialism:

Capitalism has generated massive wealth for some, but it’s devastated the planet and has failed to improve human well-being at scale.

Corporate capitalism is committed to the relentless pursuit of growth, even if it ravages the planet and threatens human health.

We need to build a new system: one that will balance economic growth with sustainability and human flourishing.

Personally, I would not be impressed with the article, it’s advocacy for a sort of techno-utopian viewpoint common among Silicon Valley types who have their hand in your pockets, but I do not expect to see this in Forbes magazine.

It’s significance is that it appears to indicate a shift in the Overton Window.