While I am generally opposed to bitcoin, I make an exception for South Florida. Miami is the rightful home of everything fraudulent, weird, and sleazy. And I say this with love. https://t.co/7erEwDjSDK

This succinctly sums up both the current cryptocurrency craze and south Florida.

As Zathras would say, “But at least there is symmetry.”

If I was a Hedge Fund losing billions to Reddit shitposters, I would get a second job driving for Uber, cut out the Starbuck’s, and skip the avocado toast. 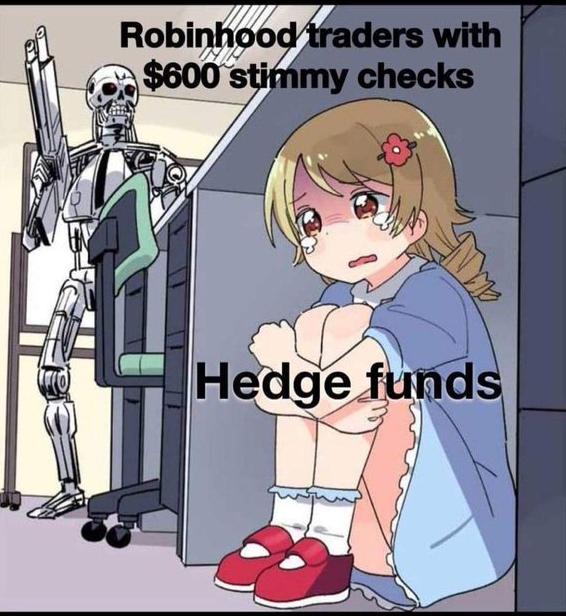 The Hedge Funds are Pissants

MaY NeEd tO gEt BaiLeD oUt pic.twitter.com/JrGW4hsxyI

to be clear. This has nothing to do with gamestop as a business. They are just a piece of rope being used in a tug of war between internet nerds and wall st suits.

the rally cry on r/wallstreet bets:

“we can remain retarded for longer than they can stay solvent!”

It appears that a bunch of Redditors have taken down at least 2 hedge funds, and on one side are the titans of Wall Street saying something must be done to stop this, and on the other side is literally everyone else in the world, who are pointing and laughing:

GameStop’s stock price continued to soar in after-hours trading last night to over $300. While many are waiting for it to come crashing back down, it might be too late for some major hedge funds. With the stock still sitting at well over $250 a share (unthinkable just last year when it was trading at under $5) after the market reopened, Melvin Capital, one of the largest hedge funds betting against the company, is reportedly getting out of the game after suffering major losses, seemingly driven out by amateurs trading on their phones and joking on Reddit in what continues to be one of the most bizarre stories of 2021 so far.

“Melvin Capital closed out its short position in GameStop on Tuesday afternoon after taking a huge loss,” the fund’s manager told CNBC this morning.

The firm, which was worth about $12.5 billion before the battle between short sellers and Redditors began, bet big against GameStop and a number of other companies, only to see 30% of the fund disappear over the last few days. That prompted other billionaires to swoop in and lend Melvin $2.75 billion to help cover the losses. Andrew Left, a notorious short-seller activist, also announced in a new YouTube video today that his investment firm moved away from most of its bets against GameStop’s stock at “a loss of 100%.”

Meanwhile, the ensuing chaos caused GameStop stock trading to be temporarily halted yet again this morning and caused outages on the trading app Robinhood. Other companies like Blackberry and AMC are also seeing smaller, though still dramatic stock climbs, as Reddit traders attempt to go boost other companies massively shorted by big hedge funds.

All of this is the culmination of a long game that’s been brewing on the WallStreetBets subreddit for a while now as amateur day traders decided to turn the misfortunes of a floundering brick-and-mortar game seller into their cause celebre for dunking on professional investment firms. In some ways it’s a very complicated story driven by the weird mechanics of Wall Street, but in other ways it’s a familiar tale of extremely online people trying to stick it to someone, in part to make a buck, but also for the “lulz.” Here’s a quick rundown of how things got here.

Short version:  A bunch or Redditors, seeing that the moribund console game store GameStop was the most shorted stock in America, decided to take down said short sellers by bidding up the price and creating a “Short Squeeze”.

The mechanism is such that the hedge funds are incredibly exposed to this, and at least one had to be bailed out by other Wall Street Parasites because it was essentially insolvent.

What’s more, it appears that the same thing is happening with AMC Theaters, Bed Bath & Beyond, and Blackberry as I am typing this. (Scroll down)

One thing that is not clear at this point is whether some other hedge fund type entity might be involved in this on the other side, though even if they did, they have done nothing illegal, since the information, “Let’s do it for the lulz,” is both accurate and publicly available.

One thing that is clear at this point is that this entire affair is showing most of the short selling activity out there serves no useful purpose, and that the arguments in favor of it, basically that shorting stocks create a financial incentive aggressive due diligence of companies, are 6 pounds of shit in a 5 pound bag.

It is one step removed from the infamous Bucket Shops of the early 1900s.

If you or a loved one has had an erection incited by Donald John Donald John Trump then you may be entitled to financial compensation https://t.co/8spbckocCx

Note to self:  Don’t confuse the words, “Insurrection,” and “Erection.”

Bolsonaro Complains That Quarantine Sucks, Then Gets Pecked by an Emu in Front of Brazilian Press

God has the best comedy writers.

If there were a Nobel Prize for PhotoShop, this guy would be in the running.

I’m pretty sure that whatever editor came up with that headline did not have to buy any of his own drinks that evening, though obviously, I am not privy to his personal life. (Pun intended)

Sweetie everyone’s already washing their hands five+ times a day, covering their face, not shaking hands + avoiding bars. Not only are we already here, you’re all Muslim. Salam brother. https://t.co/m6MDbyRrWs

We may be short of ventilators, and toilet paper, and common sense, but the strategic sarcasm reserves remain safe.

My 89 y/o grandmother, who is isolated at home in CT, just told me she reads the replies to my tweets and then investigates the profiles of people who leave rude replies. So don’t be mean to me or my grandma will judge you.

I would note that the whole thread interludes his Grandma’s banana bread recipe.

My 8 year old daughter just yelled “Oh no the toilet is smoking!!” My wife and I ran to the bathroom to find this. It’s just day 4 of home school. pic.twitter.com/tG92vJPOtR

This 8 year old will one day rule the world.

I am not sure why, but lamps figure very prominently in technological failures of smart consumer devices, and this time, it doesn’t even involve an internet connected device:

Thread by @brockwilbur: Short Thread: staying with some friends and last night after everyone went to bed I could not figure out how to turn off the large ceiling l …

The British newspaper The Guardian is known for many things, including its “Corrections and Clarifications” page.

It was one of the first such pages, and given the relatively high number of typographic errors, there is a joke that at some point The Guardian will misspell its masthead as The Grauniad,

Well, now GQ has one for the ages.

They confused an IED with an IUD. 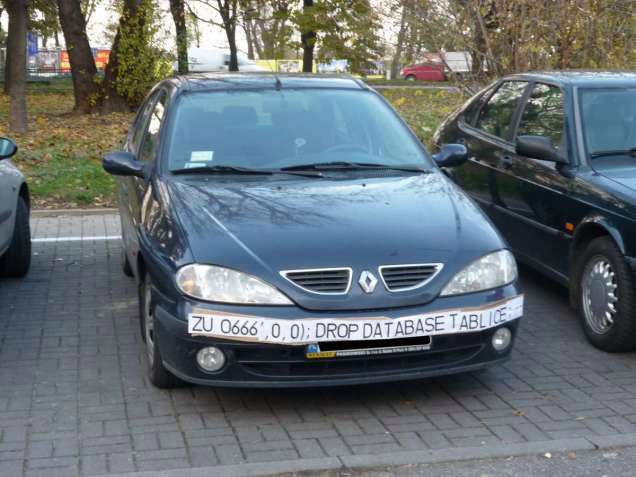 It looks like someone has been reading the “webcomic of romance, sarcasm, math, and language, xkcd, and had developed, and has developed an SQL injection attack to wipe traffic cameras.

I am not sure if would actually work, but I am profoundly impressed about how life mirrors one of the most popular web-comics on the web:

Typical speed camera traps have built-in OCR software that is used to recognize license plates. A clever hacker decided to see if he could defeat the system by using SQL Injection…

The basic premise of this hack is that the hacker has created a simple SQL statement which will hopefully cause the database to delete any record of his license plate. Or so he (she?) hopes. Talk about getting off scot-free!

I do not know if it will work, but I am profoundly amused.

One thing I won’t ever do again is build a snow dalek. I did that when we lived at our old house as the kids were into Dr Who. I learnt that when snowdaleks start to melt they upset the neighbours #snowman #snowdalek #drwho pic.twitter.com/YrK8vJqAJr

Someone made a snow Dalek, but they neglected to consider what would happen when it warmed up.

Anyone..Close To President Trump Is Getting A Legal Colonoscopy

In total agreement. Here is an hilarious example where we should have had an Oxford comma pic.twitter.com/Btt1MCTtul

I am in total agreement, but supporting the Oxford comma has always been something that I strongly endorse.

In response to this tweet about an internet connected condom:

Here's a "smart condom" that tracks thrust speed and velocity and lets you share the data. But hey, no pressure! 🍆 https://t.co/zgFCsnQF1S pic.twitter.com/kpDF5bhcb1

Chrissy Teigen responded with the following:

I have a feeling that this company’s prospect just took a major hit, because now their technology is associated with coital training wheels. 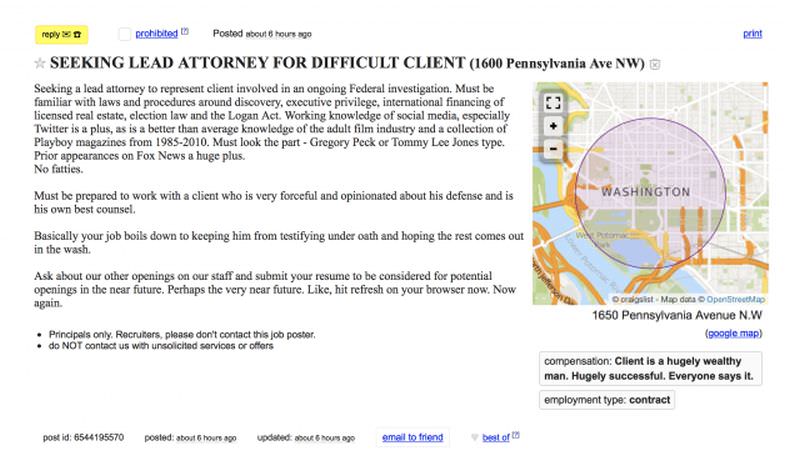 This guy needs to send his resume to Trevor Noa

Some wag posted a (now pulled) advertisement for a lawyer for Donald Trump:

This afternoon a hilarious classified ad popped up on Washington, DC Craigslist. It appears to now be taken down, but not before I snagged a copy of the text.

“Seeking Lead Attorney For Difficult Client” was the title.

“Seeking a lead attorney to represent client involved in an ongoing Federal investigation. Must be familiar with laws and procedures around discovery, executive privilege, international financing of licensed real estate, election law and the Logan Act. Working knowledge of social media, especially Twitter is a plus, as is a better than average knowledge of the adult film industry and a collection of Playboy magazines from 1985-2010. Must look the part – Gregory Peck or Tommy Lee Jones type. Prior appearances on Fox News a huge plus.

Must be prepared to work with a client who is very forceful and opinionated about his defense and is his own best counsel.

Basically your job boils down to keeping him from testifying under oath and hoping the rest comes out in the wash.

Ask about our other openings on our staff and submit your resume to be considered for potential openings in the near future. Perhaps the very near future. Like, hit refresh on your browser now. Now again.”

So this Roman centurion goes into a bar and orders a martinus.

The bartender asks, “Do you mean a martini?”

The centurion says, “Look, if I wanted a double I’d tell you!”#idesofmarch

This reminds me of this scene in Life of Brian.

A remarkably on point statement of the modern stock market.