Someone has come up with a Jewish Space Laser Agency T-shirt:

You can now get a Verified Badge crest on your Bay Area home if you’re an influencer, public figure, or represent a brand. https://t.co/SyoURdSGe7 pic.twitter.com/H1Sz3gwBdL

An artist in San Francisco had a tweet go viral where she offered “Blue Check” plaques to be placed on the homes of “Influencers” in an obvious reference to the Twitter program.

I am not surprised that it went viral, but I am surprised  that some people actually thought it was real, and made an application for approval.*

On Friday, a viral Twitter thread announced the unexpected rollout of “Blue Check Homes” — a new service allowing Bay Area residents to apply to have a “Verified Badge crest” (read: blue check mark) installed on the facade of their homes to essentially identify themselves as an authentic public figure in real life.

In a matter of hours, the thread garnered international attention, swiftly amassing thousands of retweets and likes, and over 40 million impressions. The reactions from the public were wide-ranging. Some were, understandably, annoyed by the concept. Others caught onto the joke rather quickly.

But Danielle Baskin, the SF-based artist behind the prank, had no idea the website she crafted to back up the fake service would receive 495 applicants, all hoping for a crest of their own.

“I will say a percentage of them are not from a real person. People added, like, Kim Kardashian, and that was clearly a joke,” said Baskin, who in 2019 attempted to remove a series of controversial “anti-homeless boulders” from a city sidewalk by listing them on the Craigslist free section.

“But everyone else thought the website was real. I did what I thought was a mediocre Photoshop job … I thought, ‘This is all very clickbait-y.’ All of the copy, I thought, was so obviously satire.”

Until 2½ weeks ago, Donald John Trump was President.

There is no such thing as “Obvious Satire” anymore.

*Full disclosure, I went to the website and submitted Joe biden for sh%$s and giggles.

Sharon* needed to pick up some stuff at the Wegmans in anticipation of the upcoming snowstorm, and her foot is bothering her, so I drove her there and helped her shop. 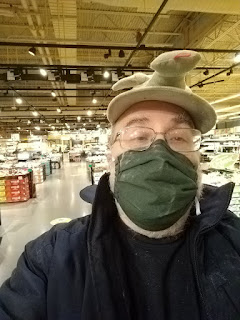 Yes, this is an aardvark hat.

I have no idea whether or not Brian Williams knew that this was coming, or someone in the control room decided to take their piss, but this is fucking beautiful.

I am referring to Elon Musk, who is in the process of adding lasers to his massive StarLink internet satellite constellation.

I understand thatthe official line is that this a technology that involves communications capability, and no ability to do damage, but he would say that, wouldn’t he

For the love of the Flying Spaghetti Monster, hide the Persian Cats!!!!

Of course, I know that the added lasers are to facilitate satellite to satellite communications, and that they are not a part of any weapons system ……… Yet.

But you have to admit that the Bond Villain aspects of Musk’s life are striking.

“We must do all we can to support free elections in America and allow democracy to gain a foothold there,” Kostunica said. “The U.S. is a major player in the Western Hemisphere and its continued stability is vital to Serbian interests in that region.”

Kostunica urged Al Gore, the U.S. opposition-party leader who is refusing to recognize the nation’s Nov. 7 election results, to “let the democratic process take its course.”

Though Kostunica has pledged to work with U.S. leaders, he did not rule out the possibility of economic sanctions if the crisis is not resolved soon.

The Onion has been predicting the future for 32 years now.

Remember, when I said that Russian humor appeals to my soul?

I’m thinking that it might be places with long, cold winters generally, because the author of this cartoon is a Finn.

Nostramadus has nothing on The Onion.

You either post Arlo Guthrie’s Alices Restaurant, or that WKRP in Cincinnati episode.

I choose the latter:

As God as my witness, I thought Turkeys could fly.

Always fun to get RT’d but we’re about ten minutes away from actual French people coming in here and telling me all the mistakes I made (I’ve counted three so far!!)

Before this, I never truly understood the deep existential angst that is Gritty before this, and it is completely appropriate that it is being said in French. (with subtitles)

Definitely the scariest Halloween costume of the year:

We’re Proud and we’re Boys and Nazi cowards can fuck right the fuck off. #ProudBoys pic.twitter.com/pOTpcJe7WZ

Here is me and my husband on our wedding day …. and a pic of our two adopted sons #ProudBoys pic.twitter.com/mloFIhcvwF

The right-wing terrorists gang known as the “Proud Boys” are being mercilessly memed by LGBTQ people all over the internet.

If you search for “Proud Boys” on Twitter, you won’t get what you’re expecting, and you will absolutely be delighted.

After Donald Trump’s reference to the extremist group at the first presidential debate, people have taken over the #ProudBoys hashtag with photos of gay men celebrating their lives and their love.

The goal of the movement is to take back the hashtag from the Proud Boys, a far-right men’s organization with a history of violence. Founded by Gavin McInnes, the group describes itself as “western chauvinists,” and the FBI considers the group to be an extremist organization with ties to white supremacy.

When asked to condemn white supremacists during the first presidential debate, Trump told the Proud Boys to “stand back and stand by.” The statement appears to have galvanized the group and bolstered their following.

Given the group’s penchant for a certain brand of white masculinity, the move to use the tag with images of gay men is not just a reclamation, but a cheeky provocation.

The exact source of this meme is unclear, but it may have started with a George Takei tweet.

I understand this. My soul is to some degree Russian, my mom was scolded over this when I was 5, and I love Russian humor, which turns the egregious and tragic into humor.

I was in the Sukkah, doing kiddush, and it came time to say a blessing on the bread.  (Hamotzi)

After that, I asked where the knife was to cut the roll, and Sharon* said, “Just tear up the roll.”

So, I scowled at the roll, and shouted at it, “You’re ugly, and your mom dresses you funny.”

Technically Belarusian humor, but still humor like this has been a part of the former USSR since before it was the USSR:

Good joke from #Belarus. Riot police (OMON) officers are beating a guy on the street. “Why are you beating me? I voted for Lukashenko!” he said. “Don’t lie to us. Nobody voted for him” they said. Classic dark Communist-time humor @thespybrief https://t.co/ePYJUnomhz

This sort of humor appeals to me on a very deep and profound level.

[Senate Majority Leader Mitch] McConnell added that should Americans need to pay rent, they can always sell their aircraft carriers to the Saudi government.

It’s nice that Monica Lewinski has a sense of humor about what was probably a horrible time in her life.

Carl Reiner, whose creative genius is beyond my capability to summarize, has died at the age of 98.

A some of his accomplishments:

If there were a Nobel Prize for PhotoShop, this guy would be in the running.

I’ve always felt that of everyone at The Daily Show John Oliver was the best host.

Jon Stewart was always a big subscriber to the view from nowhere, and while Trevor Noah is better, he is still tentative. (The less said of Craig Kilborne the better)

John Oliver is better at addressing the outrages of the day because he actually shows sincere outrage when an outrage occurs: