This is a recipe for disaster:

Federal Housing Administration mortgages — the affordable path to homeownership for many first-time buyers, minorities and low-income Americans — now have the highest delinquency rate in at least four decades.

The share of late FHA loans rose to almost 16% in the second quarter, up from about 9.7% in the previous three months and the highest level in records dating back to 1979, the Mortgage Bankers Association said Monday. The delinquency rate for conventional loans, by comparison, was 6.7%.

Millions of Americans stopped paying their mortgages after losing jobs in the coronavirus crisis. Those on the lower end of the income scale are most likely to have FHA loans, which allow borrowers with shaky credit to buy homes with small down payments.

For now, most of them are protected from foreclosure by the federal forbearance program, in which borrowers with pandemic-related hardships can delay payments for as much as a year without penalty. As of Aug. 9, about 3.6 million homeowners were in forbearance, representing 7.2% of loans, the MBA said in a separate report. The share has decreased for nine straight weeks.

Note that even though interest rates are low, Fannie Mae and Freddie Mac have implemented a
0.5-percentage-point “adverse market” fee to account for the increase risk of default, but home builders are confident.

My guess is that they are expecting a taxpayer bailout of some sort:

U.S. home builder confidence rose for a third straight month in August to match its highest level ever as record-low interest rates spur buyer traffic, data released on Monday showed in the latest indication the housing market is a rare bright spot in the economic crisis triggered by the coronavirus pandemic.

Ben Smith of The New York Times has just come out with a an article excoriating Ronan Farrow.

The thing is, there is not a whole bunch of “There” there.

Smith suggests that Farrow sees himself as a crusading reporter with an attitude, rather than an ideology free automaton, something which Farrow freely admits, so this is not what one would call a big reveal.

I’ll be honest, my first reaction to NYT publishing a bizarre hit piece on Ronan Farrow is that he’s working on something they want to preemptively discredit.

The question is why, and why now?

I think that there are a number of reasons that this story might have run.

The most banal reason for this would be that the priesthood at the The New York Times is simply offended by Farrow’s success and notoriety for what they would see as garbage journalism.

They are the “Karens” of journalism, and this is a profoundly “Karen” moment for them.

While this is a behavior that is typical of the Times hive mind, it does not typically end up in the news section.  It typically ends up in the the snark sections, OP/ED or media criticism, and not in news.

A more laudable, but by no means laudable, motivation might they want to throw Farrow off of his stride because they have a competing scoop, and they want to get there first, so they pulled this out of their back pocket.  (A stick in his bicycle spokes, so to speak.)

Assuming this is not a product of the two above scenarios, then we need to go a little bit tinfoil hat, and conclude that they have gotten word of a story that they (whoever “they” are) never want to see the light of day.

I don’t buy this, but if it is either hyper competitive journalism or a conspiracy theory, then the likely stories would cover 3 general areas:

My guess is that we going to see an Epstein story in the next few weeks, and my money is that Farrow will get there first.

Note that I have what might be the worst prediction this side of my dad, so I’m probably wrong.

It took one month to the day. https://t.co/nsoSAxM3c7

One month ago, Wes Clark, Jr. wondered when Donald Trump would suggest that people drink bleach to protect from Covid-19.

This is truly a Nostra-dumbass moment. 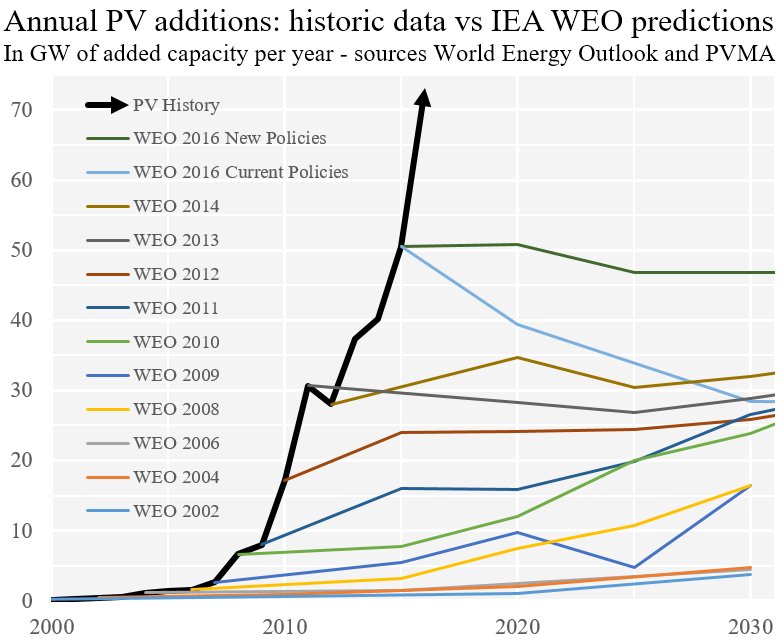 Someone is unwilling to learn from their mistakes

For a number of years now, the International Energy Agency(IEA) has published its predictions for the future, and every year they say that solar is done.

I’m wondering how many former oil industry types work there:

Every year the International Energy Agency publishes the World Energy Outlook, which, among other things, forecasts the growth rate of solar PV installations. The 2016 edition even included a whole “special focus” on renewable energy. Presumably this means they took an extra careful look at their solar PV forecast. Here it is:

That looks…odd, doesn’t it? Solar PV has grown at a pretty fast clip over the past decade, but the IEA assumes the growth rate will suddenly level out starting this year and then start to decline. And this is their optimistic scenario that takes into account pledges made in Paris.

Considering that it was originally founded to ensure reliable fossil fuel supplies, it should come as no surprise that they are dismissive of renewable energy sources.

Basically, this is “Hey, you kids, get off of my lawn!”