You’ve heard of a Rum and Coke?

It’s commonly called a Cuba Libre, though some argue that this also requires lime juice.

The other day, I picked up a pizza when I picked up my son from work at Mod Pizza, and decided to get some Birch Beer, which is somewhat hard to find, but always stocked there.

When I got home, I poured the birch beer in a glass, and mixed it with some (a lot, actually) dark rum. (No citrus added)

The wintergreen overtones (The oil in wintergreen and birch are almost identical) works very well with dark rum.

My only question now is what to call it.

“Rum and Birch” sounds like some sort of S&M thing.

I still have some rum left over from the debates, so I took:

And made a Grog.

Not bad, considering that this is really cheap rum.

I think that gas is a crutch for weak, and when smoking, I throw in some wood for flavoring.

Do to Covid-19, I’m trying to keep my traveling to a minimum, and the nearest store only had Kingsford® briquettes.

Chunk charcoal is made by taking pieces of wood, and heating them in a low oxygen oven to drive off all the non-carbon compounds. 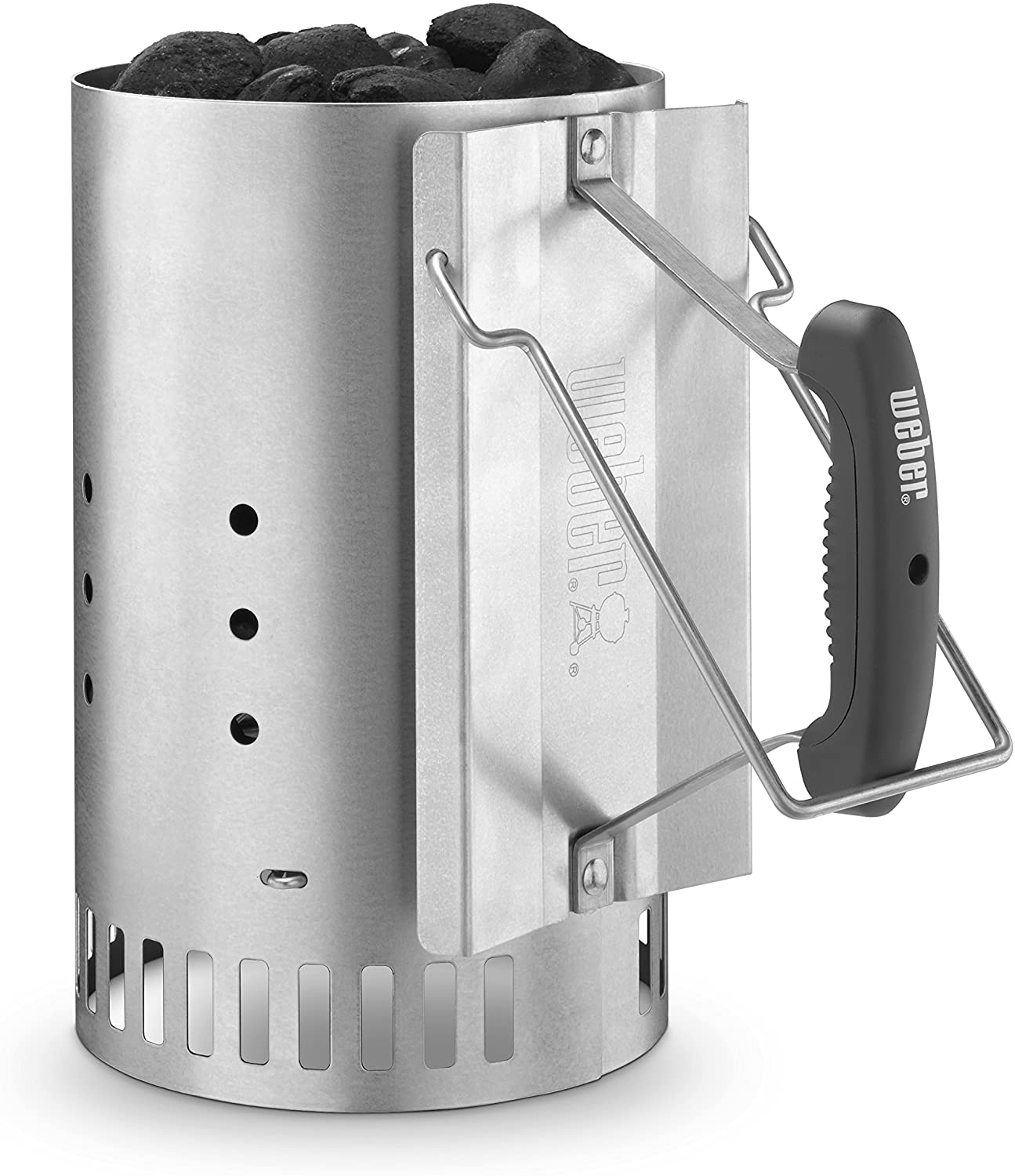 Briquettes, on the other hand, are made from sawdust cooked in low oxygen ovens, and then combined with a binders (Lime and Starch) and a release compound (Borax) and pressed into a pillow shape in a mold.

Since I use a chimney fire starter, (Yes, I know, Amazon is evil, but if you buy from this link, they pay me) where you place paper at the bottom of a tube, and charcoal at the top of the tube, and set the paper alight, which ignites the charcoal with no residue in about 10 minutes.

This compares favorably to lighter fluid, where you need to wait about 20-25 minutes, and produces a lot more air pollution.

Unfortunately, it has been my experience that when I use briquettes, there is about an additional 5-10 minutes of foul smelling smoke as the binders and release compounds burn off.

It does not effect the quality of the food, and when you add a few briquettes to an existing fire, the smoke is minimal, but startup is slower and nastier than chunk charcoal.

As an FYI, I grilled dinner for Sharon* for Mother’s Day.

I grilled steak for Sharon and myself, and burgers for the kids, who do not like steaks and roasts.

I also did up some zucchini with salt, pepper, garlic power, onion powder, and olive oil on the grill in foil pouches, and grilled some pineapple (add a small amount of kosher salt to draw out the liquid so that it can carmelize) for dessert.

And a good nosh was had by all.

A cache of ancient Jewish recipes dating back to the inquisition has been found in Miami.

It has been published, and I want a copy:

A few years ago, Genie Milgrom came across a treasure trove of old recipes stashed away in her elderly mother’s kitchen drawers. There were hundreds of them — some in tattered notebooks, others scribbled on crumbling scraps of paper.

Upon closer examination, it became apparent to Milgrom that these were the handwritten notations of generations of women in her family. The recipes had traveled as an intact, ever-growing collection from Spain to Portugal to Cuba to the United States, reflecting not only the lives of Milgrom’s ancestors, but also the hidden heritage they had for the most part unknowingly safeguarded since the time of the Spanish Inquisition.

Milgrom, who grew up devoutly Roman Catholic in Havana and Miami, has Crypto-Jewish roots. Her ancestors were Jews who practiced Judaism in secret while outwardly living as Christians to avoid being expelled, tortured, or killed by the Church. They were Crypto-Jews until the late 17th century, and lived as Catholics from then on. Through a decade-long, intense genealogical search, Milgrom discovered that she has an unbroken Jewish maternal lineage going back 22 generations to 1405 pre-Inquisition Spain and Portugal.

Her new kosher cookbook, “Recipes of My 15 Grandmothers: Unique Recipes and Stories from the Times of the Crypto-Jews during the Spanish Inquisition,” is a tribute to those female relatives who repressed or forgot their Jewish identity over hundreds of years, but managed to preserve vestiges of it through their food.

This is is awesome.

I spent this afternoon at the SCA event Trial By Fire, a competition in which cooks attempt to produce, and document, historical dishes under “Pennsic War”  (camping conditions).

You have 4 hours to do the cooking, using things like camp stoves, etc.

I have doing this competition for about 10 years, back when it was just an informal thing done in someone’s back yard.

This time, I had found recipes (see below) in 3 (Main Dish, Grain, and Dessert) of the 4 categories (also veggie).

2 of the three dishes I did with charcoal on a sheet of expanded metal on cinder blocks that is on site, and in the process, I thoughtlessly moved a brick that I was using to put my camp oven above charcoal, and ended up with a blister on my right index finger tip, which is having me type 9-fingered now.

Things did not go exactly as planned, and I arrived about 40 minutes late to the event, which meant that I had to set up my workspace, and then start cooking with about 15% of the time already gone.

Luckily, two of the dishes were quick to make, and the last one had a lot of idle time, so I managed to get all of them to the judges in the nick of time.

I was shocked when my grain dish, Lombard Rice, won the grains category, a first for me.

Then, they announced that I had won the “Grand Master”, overall award, and I was completely dumbstruck.

I had a lot of fun, but I’m wiped, and I’ll probably feel this tomorrow

Changes from the above recipe:
I am browning the meat before stewing, because I think that it tastes better.
Instead of using water, I am using lamb stock, and use it to deglaze the pot browning, because I all that lamb neck has too many bones to ignore.
I am not adding any salt because of the use of the stock, which contains some salt naturally.

Source:
Jurjaniyya: The way to make it is to cut up meat medium and leave it in the pot, and put water to cover on it with a little salt. Cut onions into dainty pieces, and when the pot boils, put the onions on it, and dry coriander, pepper, ginger and cinnamon, all pounded fine. If you want, add peeled carrots from which the woody interior has been removed, chopped medium. Then stir it until the ingredients are done. When it is done, take seeds of pomegranates and black raisins in equal proportion and pound them fine, macerate well in water and strain through a fine sieve. Then throw them into a pot. Let there be a little bit of vinegar with it. Beat peeled sweet almonds to liquid consistency with water, then throw them into the pot. When it boils and is nearly done, sweeten it with a little sugar, enough to make it pleasant. Throw a handful of jujubes on top of the pot and sprinkle a little rosewater on it. Then cover it until it grows quiet on a fire, and take it up.

—Kitab al Tabikh Chapter I (The Book of Dishes, trans. Charles Perry and published as A Baghdad Cookery Book).

Source
Nuhud al-Adra: Knead sugar, almonds, samid and clarified butter, equal parts, and make them like breasts, and arrange them on a brass tray. Put it in the bread oven until done, and take it out. It comes out excellently.
— Kitab Wasf al-Atima al-Mutada Chapter XI (The Description of Familiar Foods, trans. Charles Perry)
Features in Medieival Arab Cookery, ed. Maxime Rodinson.

Method
Put broth, salt, and saffron into a large saucepan and bring to a boil. Add rice, cover, and reduce heat. Cook for about 15 minutes, or until rice is tender. Sprinkle with sugar and cinnamon.

I just spent a LONG time deboning and trimming about 12 pounds of lamb neck.

On the bright side, all those bones, and sinew, are going into the oven for a quick roast, and then into a crock pot, and I am making a sh%$ load of stock.

I rather liked the textural combination of the fluffy waffle and the crisp skin off the chicken as well as the juxtaposition of the sweet syrup (real maple syrup next time) and savory/salty chicken.

Eating out was a bit of a challenge, fried chicken is best eaten with the hands and waffles and syrup is certainly fork and knife territory. (The wings were a particular challenge.)

I actually googled how to best eat chicken & waffles before ordering.

I enjoyed the culinary combination, and I would recommend it.

I’m not entirely sure of its origins, but I get the sense that hung over musicians played a significant roll in the origins of the dish.

First, you pickle them in brine before you fry them up.

After a week or so, open the jar and rinse the fries off and then pat dry.

Fry up as you would normal fries, and add salt immediately after cooking is done, and put on paper towels to drain the oil.

I rather liked them. 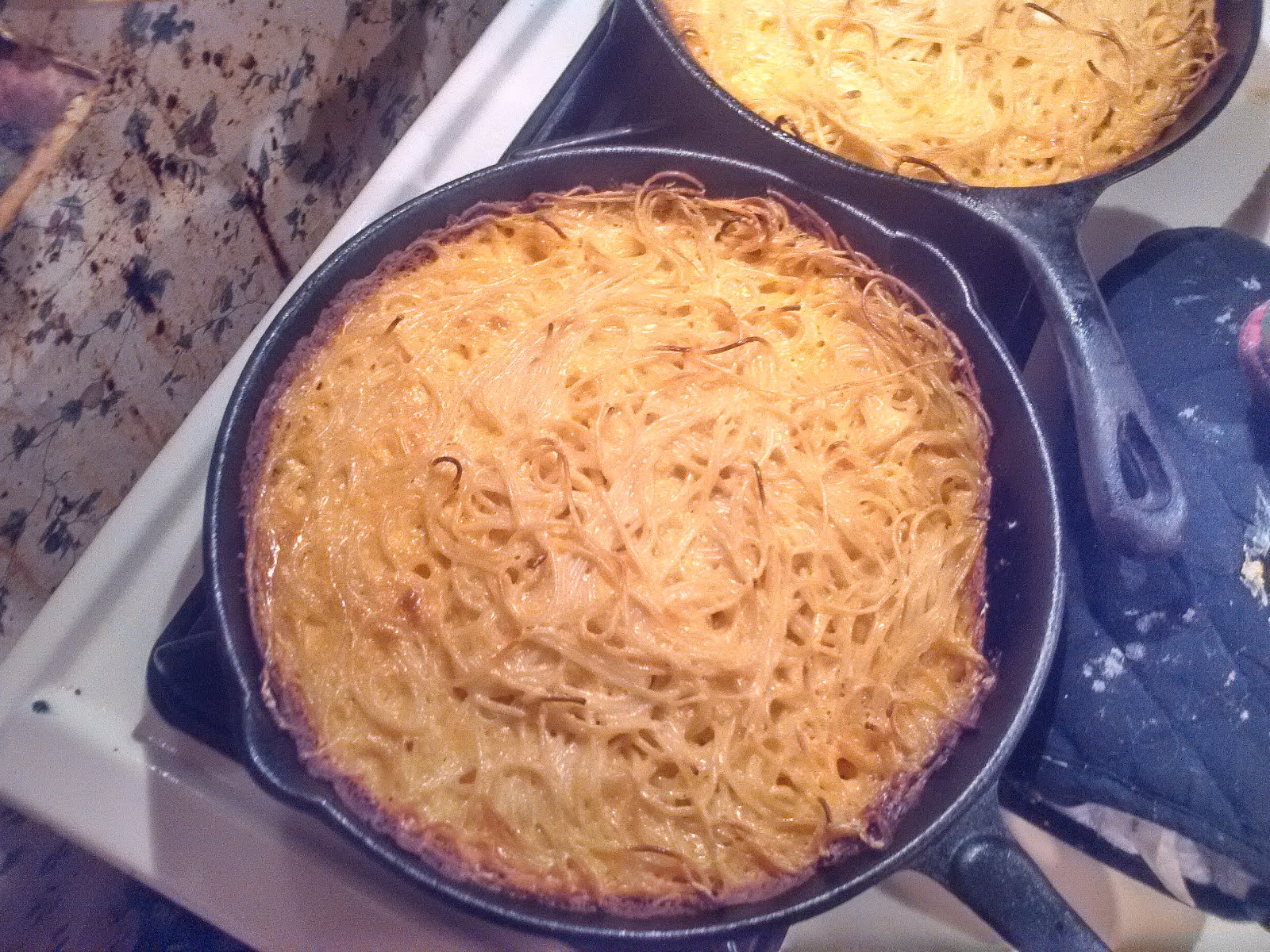 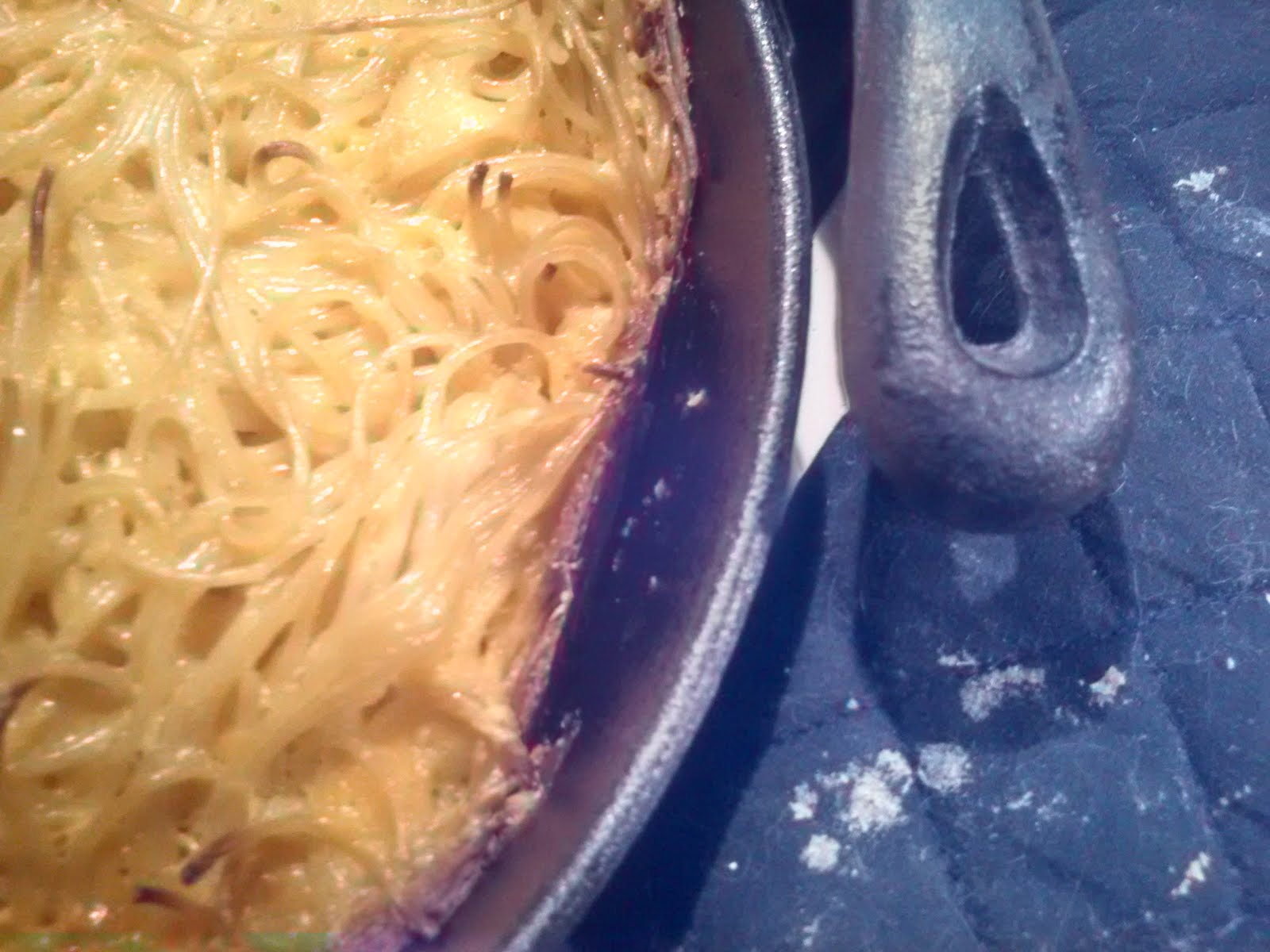 The month that I started my blog, I posted my recipe for baked spaghetti and cheese.

I referred to it as the The Ultimate Comfort Food.

On a lark, I decided to try cooking it in a preheated (350°F, heated in the oven) cast iron pan.

It turned out marvelously well.

I used two pans, one of which had a slightly less robust seasoning.

There was a small amount of sticking, but only in a few places, but the outside crust was glorious.

My basic technique was to heat the pans in a 350°F oven, and cook the spaghetti to very al dente/slightly underdone.

You then rinse the pasta in cold water to stop the cooking.

While this was all going on, I was making the melted cheese mixture (see above link).

Once the pasta and sauce was done, I mixed them together using the mark-1 human hand (with gloves, because otherwise this will be under your fingernails for a week).

I then took the pans out of the oven, sprayed with some oil , and put in the pasta/cheese mixture and pressed it down until it was flat and at the level of the edge of the pan.  (There is some rather satisfying sizzling)

Unlike the aforementioned recipe, there is no need to cook covered, and then uncover.

I love playing with cast iron.

You might also want to do this in a dutch oven.