Just sick and tired of it now.

So, unless it actually involves real aliens, I’m done.

I’m pretty sure that he won’t care about this.  He has his hands full. (Heh)

My standard statement upon putting someone on this list is:

Absent some sort of political activity, such as endorsements, running for office (PLEASE GOD NO!!), or their attempting to assassinate someone, they will not be mentioned here.

Toobin is primarily a pundit, so it’s unlikely that he will actually break news, or have an original idea, so this is probably the last time that you will hear about him here. 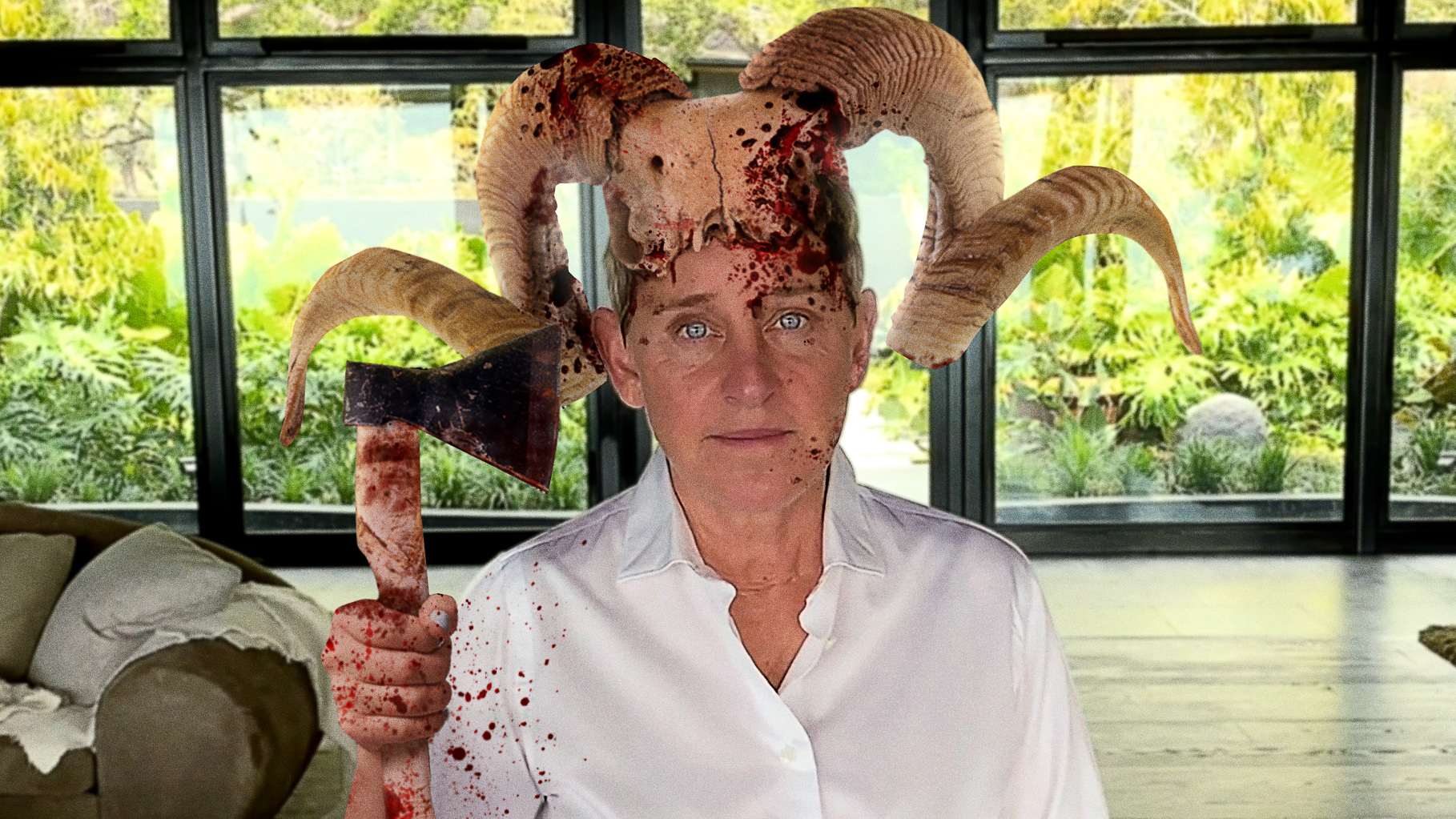 When someone passes a certain level of both inhumanity and irrelevance, they end up on my list of They Who Must Not Be Named.

Well, Ellen Degeneris has now crossed that threshold in a sufficiently egregious way that not only is she on they list, but, She also has been memed by The Onion:

Ellen: ‘I Never Intended To Make Staff Feel Unsafe By Wearing A Bloodied Ram Skull And Stalking Them With A Hatchet’

This is a level of screwing the pooch that approaches some sort of twisted dog bordello. 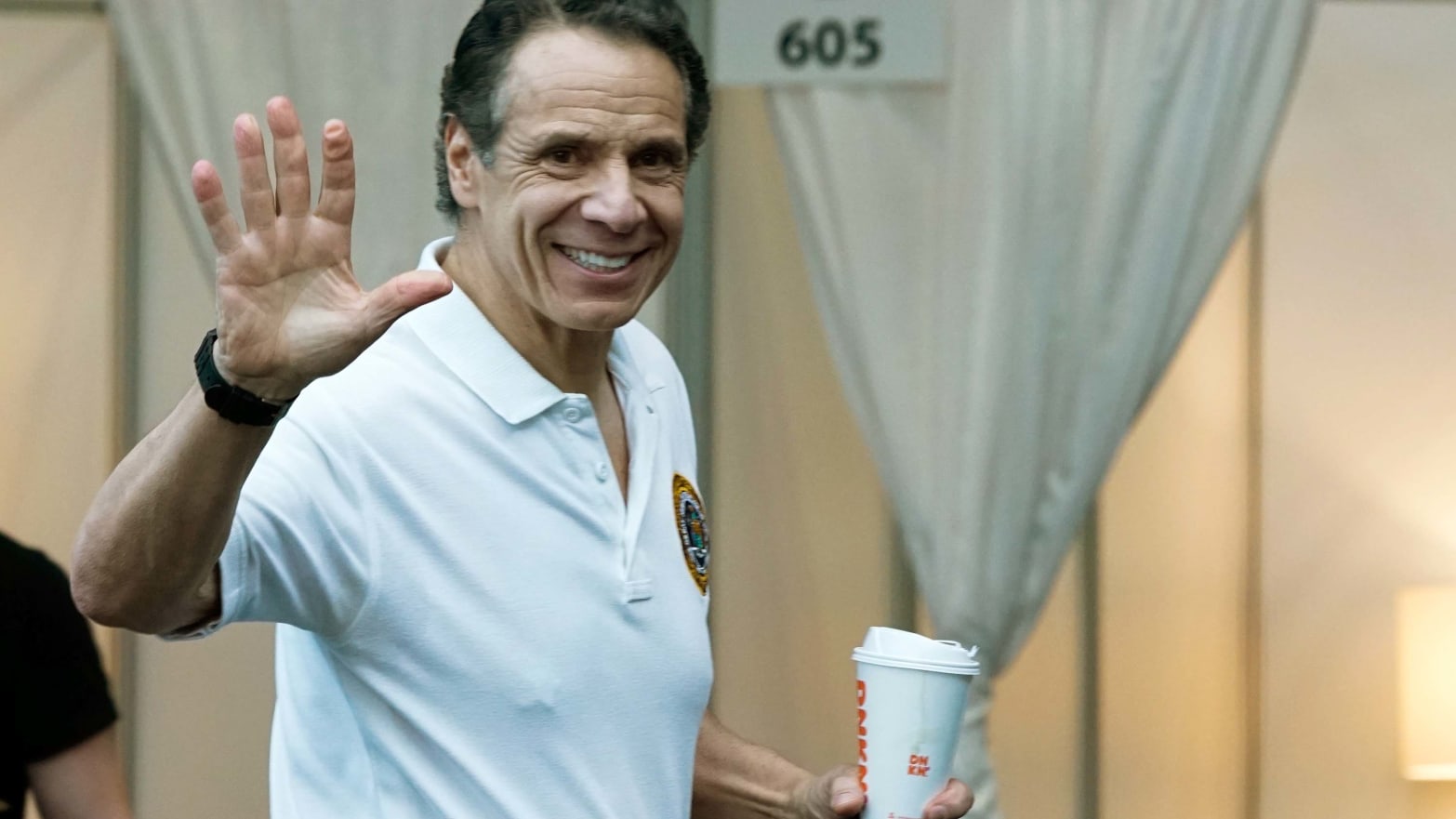 In what must be a first, I feel compelled to add New York Governor Andrew Cuomo’s Nipples to my list of They Who Must Not Be Named.

It appears that in a couple of pix with him in a polo shirt, it looked like he might have had nipple piercings.

Every day, New York Governor Andrew M. Cuomo holds a press conference to update the public amid the ongoing coronavirus pandemic ravaging his state. After speaking, he takes questions from journalists about ventilators, social distancing, and when this whole thing might be over. All things the public desperately needs to know, sure, but on Monday the internet had another question: Does our governor have a nipple piercing?

Call it the delusionary effects of staying inside for three weeks or another sign of our unmitigated, isolation-induced horniness: Some on Twitter and Reddit are convinced they can see the outline of jewelry hanging from Cuomo’s chest. The rumor began over the weekend, sparked by the white “State of Emergency” polo he’s taken to wearing.

“Is it just me or is Cuomo’s nipple totally pierced?” questioned a Reddit thread. “If it is I like him even more,” one replied. “Don’t kink-shame this hero,” another scolded.

Normally, I do not watch the Olympics, summer or winter, and I do not write about it, because the coverage is painful to watch, and because I think that it does more to foment international hostility and discord than any other mass gathering in the world.

That being said, when Covid-19 forces a 1 year delay of the games, it does take on a significance beyond sport and mindless nationalism:

A week ago, Prime Minister Shinzo Abe of Japan and Thomas Bach, president of the International Olympic Committee, were promoting the Summer Olympics in Tokyo as the balm the world needed to show victory over the coronavirus pandemic.

On Tuesday, the virus won out.

Bach and Abe bowed to a groundswell of resistance — from athletes, from sports federations, from national Olympic committees, from health experts — and formally postponed the Games, which had been scheduled to begin in late July, until 2021.

I guess that the Covid-19 pandemic now qualifies as real news now.

I have a list of people that I refuse to cover, They Who Must Not Be Named.  Basically, these are folks who occupy a significant role in popular culture, but I consider too trivial for me to write about. (Tabloid fodder)

I have applied this to actors, singers, the entire royal family, and celebrities for no reason at all, such as the the reality show family whose last name resembles an adversary race in later series in the Star Trek franchise.

My standard statement on this is:

Absent some sort of political activity, such as endorsements, running for office (PLEASE GOD NO!!), or their attempting to assassinate someone, they will not be mentioned here.

Well, the first person is coming off the list and it is Britney Spears, of all people, because she is calling for a general strike and a massive reorganization of society, which I think qualifies her for removal from the list.

Also, she is sounding Trotskyite, which means that referencing her will piss off my brother, Stephen, aka Bear who swims:

Britney Spears has called for us to strike.

On Instagram, Spears shared a graphic that included the words, “We will feed each other, redistribute wealth, strike.” Her comment on the graphic “Communion goes beyond walls 🌹🌹🌹” included three roses, the symbol associated with socialist movements in the United States, United Kingdom, and beyond. That, dear reader, is the main thing we needed to tell you.

Spears is a surprising but very welcome ally in the struggle to ensure that our response to the global coronavirus pandemic is a just one. But her meming also points to the fact that this is a very rare and unusual time: a period in which draconian, repressive government measures could be introduced, but there is also an opening for people to demand a better society. Across the globe, quarantined people are increasingly reliant on low-paid workers. Governments are swiftly discovering that the actual backbone of society is the lowest paid and, in the case of the gig economy, those with few rights.

I am an American, so I have no obligation to pay any respect, or attention, to the biggest welfare sponges in the British Isles.

Thankfully, they won’t be running for an office any time soon.

I’ve never written about him before, but I need to add Kanye West to my list of they who must not be named, after he announced that he is changing his name to, “Christian Genius Billionaire Kanye West”, and that he will run for President in 2024.

Normally, my list has exception for people who run for office, but in the case of Kanye, Imma let you finish, but unless you actually win a caucus or a primary, you are out of here.

Kanye West is now on my list of my list of They Who Must Not Be Named:

Kanye West knows what’s going to put him in the Oval Office in 2024 — he’s reaffirming his plans to run while revealing his platform and a name change … a huge one.

Ye also complained about Forbes’ reluctance to label him a billionaire and announced he’ll change his name to “Christian Genius Billionaire Kanye West” … just to stick it to the outlet.

As near as I can tell, this is not some sort of performance art for a mockumentary.

Scott Adams, who has decided that using a mass shooting in California to promote his blockchain scam is the height of virtue:

When a gunman opened fire at the Gilroy Garlic Festival in Gilroy, California, on Sunday evening, killing at least three people, including a 6-year-old boy, and wounding 12 others, Dilbert creator Scott Adams apparently saw a juicy marketing opportunity for his blockchain app.

Adams is best known for creating Dilbert, a comic strip satirizing soulless corporate culture and the grueling punishment dished out on its eponymous engineer by idiot co-workers and clueless management. But he also moonlights. In addition to punditry on topics ranging from fifth-dimensional chess analyses proclaiming Donald Trump a genius Pavlovian manipulator to tortured theological treatises, to questioning the specifics of the Holocaust’s atrocities, Adams is the co-founder of app company WhenHub. WhenHub is similar to Cameo, the app that allows everyday people to pay celebrities to create customized videos, except instead of pre-recorded messages from movie stars and rappers, it offers live chats with a range of subject-matter experts.

Adams seems to have concluded the Gilroy Garlic Festival shooting was an ideal time to direct-market this app to witnesses—who, as he made quite clear on Twitter, he believed could cash in on their traumatic experience by selling interviews to news organizations via WhenHub.

According to the Los Angeles Times, the gunman opened fire sometime around 5:30 p.m. PT on Sunday when the festival was nearing its conclusion. Less than three hours later, at 8:21 p.m. PT, about 13 minutes after President Trump advised locals to exercise caution because reports indicated the shooter was still at large, Adams began pitching the survivors on signing up for, and charging for, interviews with media outlets via WhenHub.

“If you were a witness to the #GilroyGarlicFestivalshooting please sign on to Interface by WhenHub (free app) and you can set your price to take calls. Use keyword Gilroy,” Adams tweeted.

Roughly 23 minutes later, Adams had some advice for critics who correctly identified this as shameless opportunism aiming to capitalize off an atrocity: Grow up and stop it with the “fake outrage.”

Adams did not immediately respond to our request for comment, although he did respond to the controversy in a livestream Monday morning on Periscope, where he continued to stand by his promotion efforts and blamed the controversy on socialism.

He hasn’t had an original idea for his comic strip since before the end of the last century.

Don’t read his comics, don’t buy his merch, and if you want to complain to your local paper about this, that would be nice too.

Scott Adams should have been drowned at birth.

Absent some sort of political activity, such as endorsements, running for office (PLEASE GOD NO!!), or her attempting to assassinate someone, she will not be mentioned here again.

Former football coach and tight end Mike Ditka, who just said that, “there has been no oppression in the United States in the past 100 years:

Even before this NFL season, which has featured team owners linking arms with players as shows of solidarity amid sharply critical comments from President Trump, some players were noting that the original message of protests during the national anthem had been largely lost. To them, the cause of bringing attention to racial injustice, in particular police brutality against black men, had been overshadowed by a heated national discussion over the merits of taking a knee during the national anthem.

To former NFL coach and ESPN analyst Mike Ditka, however, that cause made no sense to begin with. In a pregame interview before a radio broadcast of Monday night’s game between the Chicago Bears and Minnesota Vikings, he said, “There has been no oppression in the last 100 years that I know of.”

The Germans have a term for this, Fachidiot, (Google Translate) which refers to an expert who is a complete moron outside of his limited area of expertise.

Thus, I add Michael Keller Ditka to my list of They Who Must Not Be Named, unless he decides to do something like running for office, (please God no) you will here nothing about him from me

Of course, I haven’t posted about him before, so carry on.