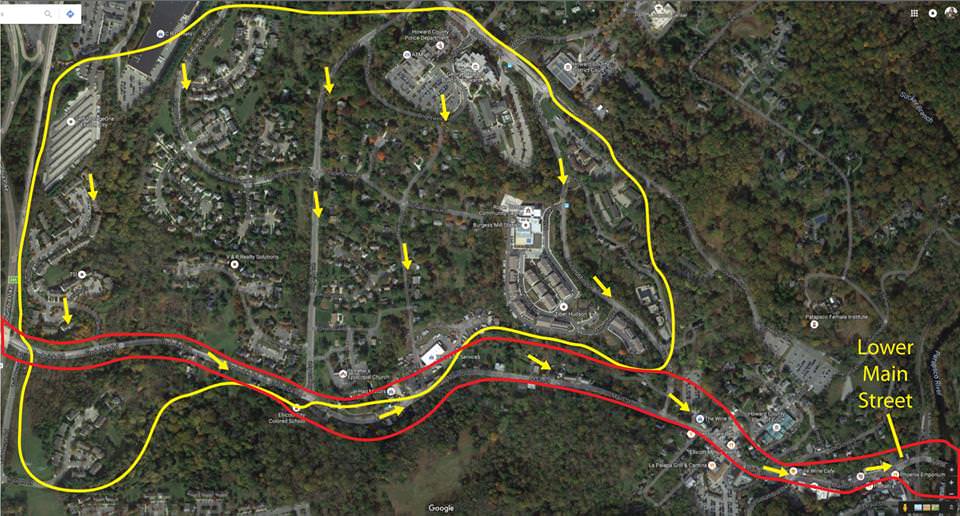 Area in yellow has been paved over, creating a flood making machine

Notwithstanding the flooding which got wide coverage in Ellicott City, it was not a big deal where I live, Owings Mills, about 20 miles away.

It was a fairly intense storm, but beyond a few flooded basements, it should not have been a disaster.

The flooding was caused by reckless and uninformed real estate development:

For 200+ years the flooding in Ellicott City came from the rising of the Patapsco River and was mostly limited to lower Main Street. During major rain storms the water was absorbed into the ground in the surrounding woods north and west of town and the Tiber River, which runs east along Fredrick Road, was wide enough to handle the overflow that ran through town. (rivers have the uncanny ability to be just as wide and deep as they need to be)

In the past 20+ years developers and Howard County zoning board have banded together to pave over all of those woods with medium and high density housing. The yellow area is mostly new construction built in the last two decades. When you pave over the natural terrain and add sewers and roads that lead directly to Main Street (red area) you get a high speed rollercoaster for the water to ride right through town. This “top down” flooding has nothing to do with Mother Nature. This is a man-made disaster caused by greedy and/or uninformed people who decided that building homes above this wonderful city was worth the risk of destroying it.

The county executive may be right that this is a “once in a thousand year storm” but anyone who has ever been on Main Street in a rain storm knows that flooding is a common occurrence since the construction above town became so out of control. Now, in perfect irony, The state and county will spend more money than they earn on tax from new construction to fix the damage it created. This is a horrible disaster but nature had nothing to do with it.

This problem was foreseeable, and there have been plenty of indications of a problem even before the last flood 2 years ago.

I am not sure what can be done to fix this now, though requiring the replacement of driveways and parking lots with porous surfaces could not hurt.