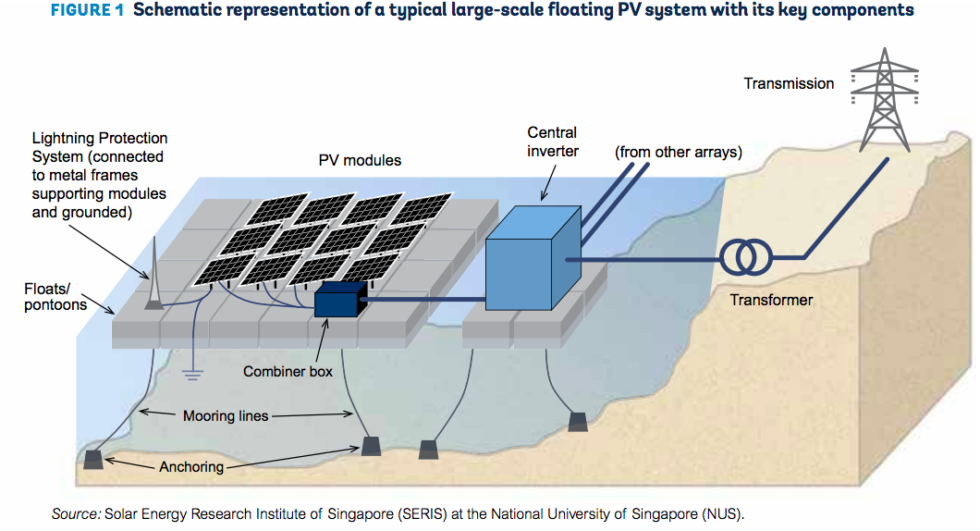 The title is a term for floating solar panels on water, and while the initial costs are larger there are some significant advantages:

A total of 1.1 gigawatts (GW) of solar have been installed around the world as of September, according to a new report by the World Bank (PDF). That’s similar to the amount of traditional solar panel capacity that had been installed around the world in the year 2000, the report says. The World Bank expects that, like traditional solar 18 years ago, we’re likely to see an explosion of floating solar over the next two decades.

That’s because floating solar is not simply “solar panels on water.” Solar panels prevent algae growth in dammed areas, and they inhibit evaporation from occurring in hotter climates. (According to Yale’s School of Forestry and Environmental Studies, major lakes in the southwestern US like Lake Mead and Lake Powell can lose more than 800,000 acre-feet of water to evaporation per year, and the adorably-described “floatovoltaics” could prevent up to 90 percent of that evaporation.”) Additionally, floating solar avoids taking up space on land that is priced at a premium. In Northern California, for example, a floating solar installation was added to a nearby reservoir because the land around it was better used for growing grapes.

Another benefit of floating solar is that ground doesn’t have to be leveled before the plant is installed. Usually, fixed-tilt panels are attached to a floating platform that’s moored to the bottom of the reservoir. Most systems send electricity through floating inverters, although in some smaller installations the inverters are situated on land.

The downside is, of course, cost. Floating platforms and water-resistant wiring are more expensive for water-dwelling panels than for their land-based counterparts. As solar PV panel prices have been falling, however, the extra cost to make a floating system might save it from being considered too expensive.

Floating solar and hydroelectric dams actually work in a pretty nice symbiosis. In some areas, hydroelectric dams produce energy in an extremely predictable manner. In these cases, the electricity can be used to augment the more variable solar energy coming from the panels. In other cases, hydroelectric energy wanes in times of drought, and solar energy can be used to augment hydroelectric power when water levels are low. “Floating solar may therefore be of particular interest where grids are weak, such as in Sub-Saharan Africa and parts of developing Asia,” the World Bank writes.

Large reservoirs are large areas that are not available for other development, and their placement on things like the 3 Gorges Dam, where algae blooms have occurred,  might ameliorate the some of the impacts of that particular clusterf%$#.