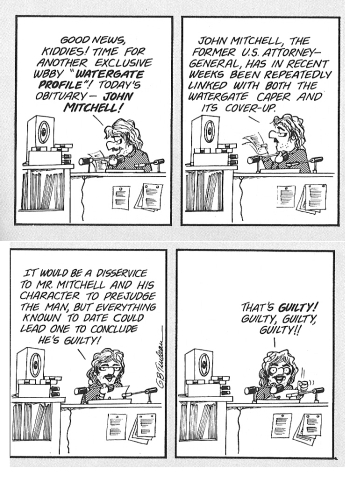 Unlike SecDef Mattis and Secretary of State Pompeo, who have studiously avoided looking at the intelligence data so that they could express doubt about the accusations that Crown Prince Mohammed bin Salman (MBS) ordered the murder of Jamal Khashoggi, CIA Director Gina Haspel has to look at the intelligence.

It’s job one for the DCIA.

So, now that she has briefed Senators on what she knows, and while they cannot discuss the specific intelligence, they have said that MBS guilty as hell:

Senators emerged from an unusual closed-door briefing with the CIA director on Tuesday and accused the Saudi crown prince of complicity in the killing of journalist Jamal Khashoggi.

In some of their strongest statements to date, lawmakers said evidence presented by the U.S. spy agency overwhelmingly pointed to Crown Prince Mohammed bin Salman’s involvement in the assassination.

“There’s not a smoking gun — there’s a smoking saw,” said Sen. Lindsey O. Graham (R-S.C.), referring to the bone saw that investigators believe was used to dismember Khashoggi after he was killed Oct. 2 by a team of Saudi agents inside the country’s consulate in Istanbul.

………“If the crown prince went in front of a jury, he would be convicted in 30 minutes,” said Sen. Bob Corker (R-Tenn.), the chairman of the Senate Foreign Relations Committee.

Haspel, who had declined to appear alongside Mattis and Pompeo at a briefing on U.S.-Saudi policy for the full Senate last week, was joined by agency personnel and gave what lawmakers described as a compelling and decisive presentation of the evidence that the CIA has analyzed since Khashoggi, a Washington Post contributing columnist, was killed.

Graham leveled sharp criticism at Pompeo and Mattis, saying he thought they were “following the lead of the president.” He called them “good soldiers.” But, Graham added, one would “have to be willfully blind not to come to the conclusion” that Mohammed was “intricately involved in the demise of Mr. Khashoggi.”

“It is zero chance, zero, that this happened in such an organized fashion without the crown prince,” Graham said.

Sen. Richard C. Shelby (R-Ala.) said that “it would defy logic to think” that someone other than Mohammed was responsible, noting that members of the prince’s own royal guard are believed to have been part of the team that killed Khashoggi.

The only question now is whether Trump is protecting his, or Jared Kushner’s business interests in Saudi Arabia.