It appears that the House of Saud is their real employer:

In the six months since Jamal Khashoggi was murdered by a Saudi “Rapid Intervention Group” in the Saudi Arabian consulate in Istanbul, press reports have described a variety of information swept up by U.S. intelligence that foretold or foreshadowed the heinous crime. The reporting has cast a rare light not only on our spy agencies’ activities and capabilities, but also on the complicated moral dilemmas that accompany mass surveillance. And it has intensified questions over whether the intelligence agencies that gathered this information carried out a legally required duty to warn the journalist that his life was in danger.

The press reports make for sobering reading. A week after Khashoggi was killed, the Washington Post described intercepted communications discussing a plan to lure the U.S.-based journalist back to Saudi Arabia—information that an unnamed U.S. official said “had been disseminated throughout the U.S. government and was contained in reports that are routinely available to people working on U.S. policy toward Saudi Arabia.” A December Wall Street Journal report described messages intercepted in August of 2017 suggesting that if the plot to lure Khashoggi to Saudi Arabia did not succeed, “we could possibly lure him outside Saudi Arabia and make arrangements,” and a February New York Times story described a conversation the NSA intercepted in September 2017 between Crown Prince Mohammed bin Salman and a close aide of his in which the Crown Prince vowed, if efforts to lure Khashoggi back to Saudi Arabia or to repatriate him by force failed, to go after him “with a bullet.” A March New York Times report revealed that U.S. intelligence had collected information that showed the same “Rapid Intervention Group” that murdered Khashoggi had been involved in the kidnapping and forcible repatriation for detention and torture of several other Saudi dissidents over the previous three years. (At least three of these operations, involving members of the Saudi royal family, had been described by the BBC before Khashoggi’s murder.)

These stories rely on a combination of leaks by anonymous sources and information compiled in the classified November 2018 CIA assessment of the Khashoggi murder, which was quoted or summarized by sources or by reporters who were shown sections of the report. The intelligence described in these reports has not been officially confirmed, and the articles generally include pushback from the White House and intelligence community suggesting the information was less conclusive than the articles imply, or that the information existed as raw intelligence that had only been reviewed and processed in the wake of the murder. Missing from any of the pushback, however, is any assertion that U.S. intelligence agencies do not engage in this kind of surveillance, or that they did not routinely deploy these tools against Mohammed bin Salman both before and after he was named Crown Prince in June of 2017.

We now know, thanks to Freedom of Information Act (FOIA) requests and litigation filed by the Knight First Amendment Institute and the Committee to Protect Journalists (CPJ) in the days after Jamal Khashoggi’s murder, exactly what an NSA employee who finds herself in this situation is supposed to do. This is the first time these documents have been publicly released.

A July 2017 “Duty to Warn Standard Operating Procedures (SOP),” and a May 20, 2018 NSA and Central Security Service (CSS) Policy Instruction on the Duty to Warn, lay out a specific roadmap for what intelligence officers must do to comply with Intelligence Community Directive 191, which is the 2015 order that recognized and codified the responsibility to warn someone who is known to be in danger. A legal obligation first defined for health professionals who learn in the course of caring for a patient that the patient may pose a risk to himself or to others, the “Duty to Warn” as defined for NSA and CSS officers is described in the SOP this way:

The directive is clear: Anyone who fields credible and specific threat information must act. The NSA guidelines then lay out the process by which threats are evaluated and warnings delivered, and describe at least five specific points in the process that must be documented—including the justifications for any decision to waive the duty to warn requirement and opt out of the obligation to issue a warning. The guidelines even reproduce the template an NSA employee must complete to forward the warning to either the FBI or CIA for delivery to the intended victim. 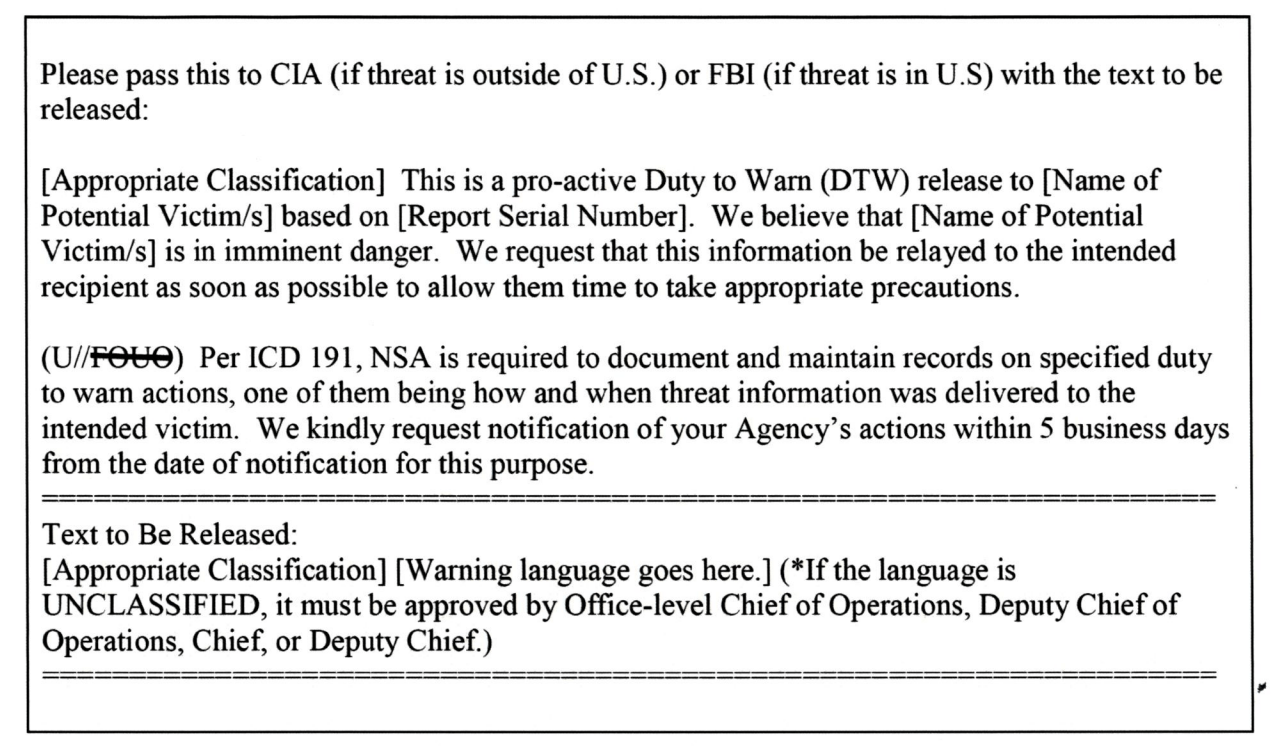 The Knight Institute and CPJ specifically sought documents like the ones required in these NSA procedures in their FOIA requests to the Office of the Director of National Intelligence (ODNI), the NSA, CIA, FBI, and the State Department. In addition to the guidelines each of these agencies uses in determining whether and how to deliver warnings, we also requested records relating to any Duty to Warn decisions and actions the agencies may have taken in connection with threats to Khashoggi, and any records they may have concerning debates or discussions between agencies related to those threats.

Why on earth are our intelligence agencies are bowing down before the House of Saud, arguably the most corrupt and brutal despots on the face of the earth, is completely beyond me.

It needs to stop.