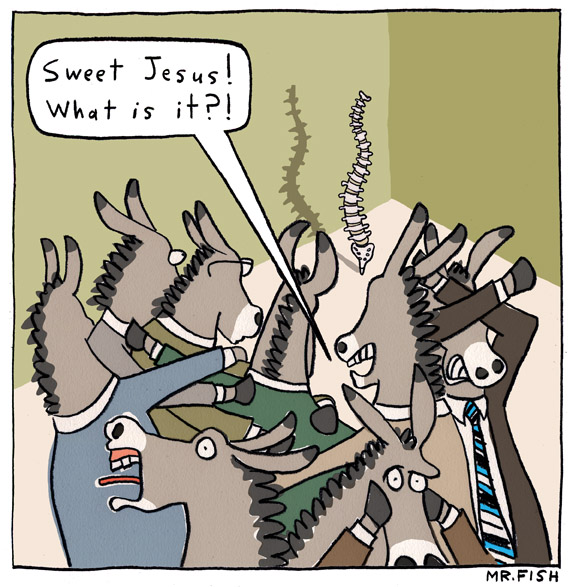 Well, in a feat of profound stupid cowardice, House Democrats are planning to water down their minimum wage bill, because, I guess, actually helping the working man is scary:

Top House Democrats are eyeing a major tweak to the caucus’ signature minimum wage proposal, part of a last-minute bid to bolster support among moderates just days before a floor vote.

Democratic leaders are floating a more gradual path to a federal minimum wage of $15 per hour, which would mark a concession to some centrists who had been hesitant to back the bill for fear of aggravating small businesses, according to multiple sources familiar with the ongoing discussions.

Under the proposal, employers would have six years to phase in the wage hike rather than five.

The House plans to vote on the bill next week. And while top Democrats like Majority Leader Steny Hoyer have said they’re confident it will have enough votes to pass, they have worked behind the scenes to shore up more support and avert any drama on the floor.

Democrats have long worried that a GOP procedural maneuver on the floor — in which Republicans use a “motion to recommit” to put forward their own changes — could ultimately tank the entire effort.

If Republicans win support from about two dozen Democrats, they could force changes to the bill all within a few minutes. That could result in others in the caucus, including progressives, choosing to revolt and vote it down.

They are worried about faux Dems knifing them in the back, so they are pre-capitulating, because they have no guts.

You know, maybe Nancy Pelosi should spend less time clapping ironically or slagging real Democrats in her caucus, and instead whip the phony Democrats to vote for raising the minimum wage, which, after all, is overwhelmingly supported across the partisan divide.

This sort of crap is why people don’t believe it when Democrats say that they will help ordinary people, because when push comes to shove, they cave so badly they should be wearing spelunking helmets.