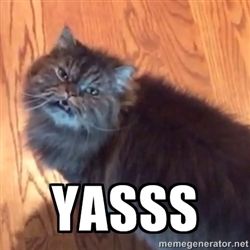 Bernie Sanders has promised to enforce criminal penalties against CEOs who engage in monopolistic behavior.

Be still my beating heart:

Bernie Sanders, if he were elected president, would revive the criminal provisions of the Sherman Antitrust Act to prosecute CEOs who have illegally monopolized a market, he told The Intercept in an interview.

The Sherman Act is the Department of Justice’s main tool for enforcing antitrust laws, which are meant to prevent monopolies from dominating an industry, which harms workers, consumers, and other businesses. It has both civil and criminal provisions, though in recent years, prosecutors have relied only on its civil provisions, with the intent of breaking up monopolies and opening markets.

Asked if the criminal provisions, which could see a CEO locked up for 10 years if intent to engage in unfair restrictions on trade can be proven, Sanders said, “Damn right they should be.”

Major Sherman Act civil cases reshaped the American economy in the 20th century — particularly the breakup of AT&T in 1984, which paved the way for the rise of Silicon Valley. Civil prosecutions scare business leaders as a business matter, while criminal prosecutions, which have been sparse, frighten them personally.

Your mouth to God’s ear.

“Roosevelt’s antitrust chief Thurman Arnold used to criminally indict business executives and fingerprint them like ordinary executives,” said Matt Stoller, whose new book “Goliath: Hundred Year War Between Monopoly Power and Democracy” chronicles these battles. (Arnold was an assistant attorney general who led the Justice Department’s antitrust division.) “As soon as he did this, amazingly, monopolistic practices in those industries would cease.”

Which is why the spectacle of business leaders being frog-marched out of their offices in handcuffs should become a routine sight.

Without personal consequences for CEOs and their ilk, they take their slap on the wrist, take their 8 figure bonuses, and do it all over again.