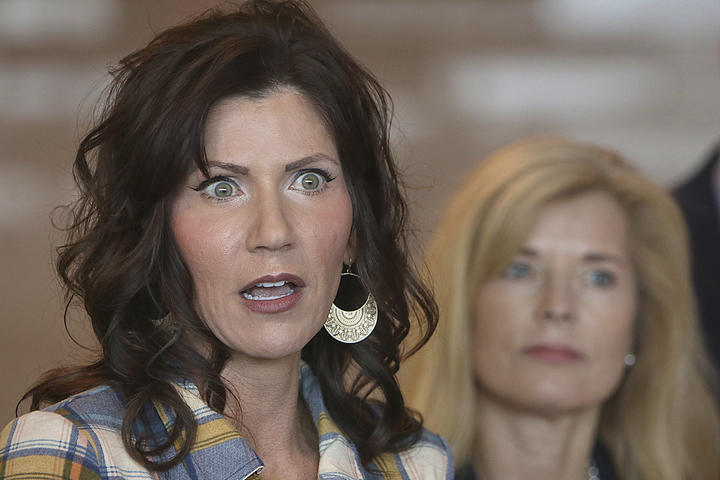 It looks like another right wing politician worshiping at the altar of Trump is now discovering that that whole Golden Calf thing was a warning, not an instruction.

So now South Dakota Governor Kristi Noem has one of the largest Covid-19 clusters, and a significant proportion of the United States pork production has been taken off line, and her state is in a world of hurt.

And yes, she has some seriously CRAZY eyes:

As governors across the country fell into line in recent weeks, South Dakota’s top elected leader stood firm: There would be no statewide order to stay home.

Such edicts to combat the spread of the novel coronavirus, Gov. Kristi L. Noem said disparagingly, reflected a “herd mentality.” It was up to individuals — not government — to decide whether “to exercise their right to work, to worship and to play. Or to even stay at home.”

And besides, the first-term Republican told reporters at a briefing this month, “South Dakota is not New York City.”

But now South Dakota is home to one of the largest single coronavirus clusters anywhere in the United States, with more than 300 workers at a giant ­pork-processing plant falling ill. With the case numbers continuing to spike, the company was forced to announce the indefinite closure of the facility Sunday, threatening the U.S. food supply.

“A shelter-in-place order is needed now. It is needed today,” said Sioux Falls Mayor Paul TenHaken, whose city is at the center of South Dakota’s outbreak and who has had to improvise with voluntary recommendations in the absence of statewide action.

You know, if your only goal is to drown the government in a bath tub, it’s a tough to sell in the middle of a pandemic.