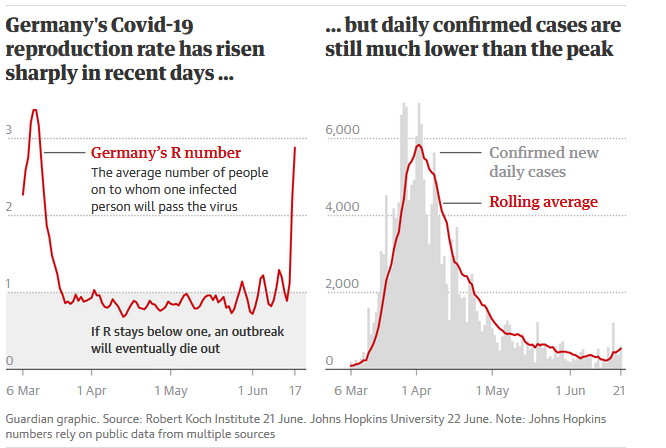 In Germany there has been a major Covid-19 outbreak at an abattoir, (I love the word, “Abattoir.” I need to use it more often) with over a thousand cases linked to the meat processing plant.

This has taken the R-Number,  the infection rate of an epidemic, from about .75 to 2.88, meaning that infections are growing again, not shrinking: (Any number over 1 indicates an increase in the number of cases)

The owners of Europe’s largest meat-processing plant must be held to account for a mass coronavirus outbreak that has infected more than 1,500 of its workers, Germany’s labour minister has said.

Hubertus Heil said an entire region had been “taken hostage” by the factory’s failure to protect its employees, most of whom come from Romania and Bulgaria.

Germany’s coronavirus reproduction or R rate leapt to 2.88 over the weekend largely as a result of the outbreak at the plant at Gütersloh in North Rhine-Westphalia (NRW). About 7,000 people have been sent into quarantine as a result of the outbreak, and schools and kindergartens in the region that had been gradually reopened have been forced to close until at least after the summer holidays.

Health authorities have accused Tönnies, the family-run business that owns the plant, of breaking regulations around physical distancing that were introduced to dampen the spread of coronavirus. Authorities say Tönnies has also been reluctant to give them access to workers’ contact details, allegedly hampering the tracking and tracing of the workers and their contacts. Tönnies said delays in handing over personnel data had been due to Germany’s strict data protection laws.

Clemens Tönnies, the company’s billionaire CEO, held a press briefing at the weekend at which he apologised for his company’s management of the crisis, and said it would take “full responsibility” for what had to be done to combat it. Within his own family there have also reportedly been attempts to oust him from his role. He has ruled out resigning.

Of course he has ruled out resigning.

This is exactly the same sort of apology as was given by Volkswagen executives.