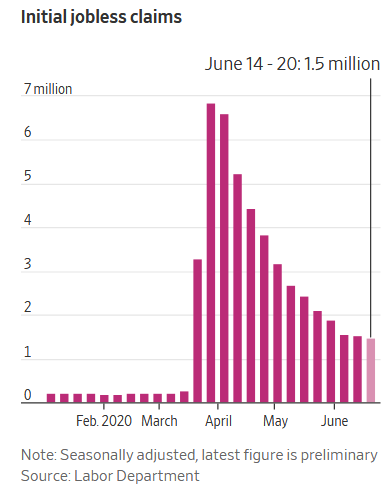 Initial unemployment claims remained at 1.5 million, worse than had been predicted.

This is not a “V-Shaped” recovery:

The number of workers seeking jobless benefits has held steady at about 1.5 million each week so far in June, signaling a slow recovery for the U.S. economy as states face new infections that could impede hiring and consumer spending.

Applications for unemployment benefits were slightly below 1.5 million last week, at 1.48 million, the Labor Department reported Thursday. While weekly totals have gradually eased from a late March peak of nearly 7 million, they also remain well above the prepandemic record of 695,000 in 1982.

Meanwhile, the number of people receiving benefits, an indicator for overall layoffs, totaled 19.5 million in the week ended June 13, down slightly from previous weeks.

Economists say the sluggish improvements in claims tallies dim prospects for a quick recovery. Further, a recent increase in coronavirus cases could affect efforts to reopen the economy—and get people back to work and spending money.