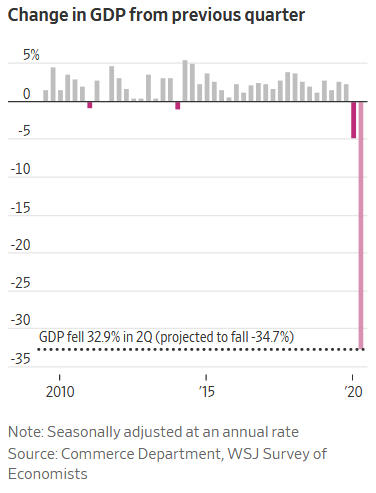 Not only did initial jobless claims go up for the 2nd week in a row, but the 2nd quarter GDP numbers show an annual 32.9% decline.

These numbers are not just the worst for the US since modern statistics started being collected after World War II, these numbers are, “US investors are assisting with privatizing the economy,” bad:

The economy contracted at a record rate last quarter and July setbacks for the jobs market added to signs of a slowing recovery as the country faces a summer surge in coronavirus infections.

The Commerce Department said U.S. gross domestic product—the value of all goods and services produced across the economy—fell at a seasonally and inflation adjusted 32.9% annual rate in the second quarter, or a 9.5% drop compared with the prior quarter. The figures were the steepest declines in more than 70 years of record-keeping.

This is unbelievably grim.