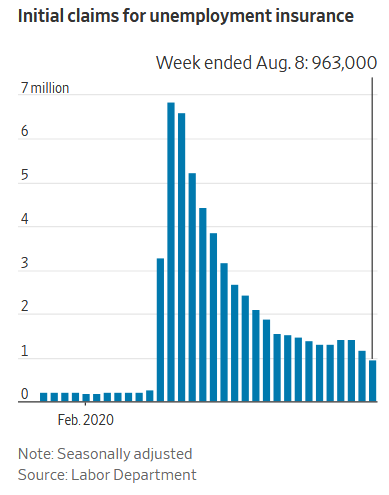 The Trend is Encouraging

Initial jobless claims fell below 1 million for the first time in five months.

The number is bad, it’s no longer twice than the pre-Covid record:

U.S. unemployment claims fell below one million last week for the first time since the coronavirus pandemic struck in March, as the deeply wounded labor market continues to regain some footing.

New applications for unemployment benefits dropped to a seasonally adjusted 963,000 in the week ended Aug. 8, the Labor Department said Thursday, marking the second weekly reduction in filings. The number of people collecting unemployment benefits through regular state programs, which cover the majority of workers, also decreased to about 15.5 million at the beginning of August.

But both figures remain well above even the worst figures before the pandemic struck, with the number of people receiving benefits more than double the 6.6 million reached in 2009.

Unemployment remains elevated as other measures of the economy, including consumer spending, also lag behind levels from before the coronavirus hit. An increase in coronavirus infections across much of the country continues to threaten economic gains as states put in place new restrictions aimed at containing the pandemic.

The drop in claims could also reflect waning fiscal support by the government, Ms. Pollak said. The late-July expiration of an extra $600 a week in federal jobless benefits—added in March under a virus-relief package—puts much less money in unemployed individuals’ pockets, possibly discouraging them from seeking benefits.

Without the $600 weekly boost, payments dropped to the level set by states, which averaged about $330 a week for the 12 months through June, according to the Labor Department.

The downside to all of this is that more places, and businesses, are backing off from reopening because of new outbreaks, and the programs that cushioned the impact, notwithstanding Donald Trump’s bullsh%$ executive orders, have shut down.

The countervailing winds are strengthening.