David Sirota and Andrew Perez offer a long overdue explanation of how Donald John Trump is not the disease, he is the symptom.

Seriously, if we give politics to the people who screwed everything up in the first place, we are setting the table for someone even worse than Donald Trump.:

In the closing hours of the 2020 election, Donald Trump is dishonestly casting his reelection bid as a crusade against the corrupt swamp that he helped expand and profited from, while Democrats are promising that if Trump is defeated, voters will finally be able to go back to brunch as the Washington establishment returns itself to power.

To counter Trump’s assault, the Democratic campaign this weekend returned to Flint, Michigan — the place the Obama administration left to suffer through a horrific toxic water crisis, exacerbated by Michigan’s then-Republican governor (who has since endorsed Biden).

This was the party’s flaccid message in the nation’s poorest city, a former General Motors manufacturing hub destroyed by deindustrialization and offshoring.

It is true that the Obama years were not defined by petty bullshit that is routinely called “scandalous.” However, his two terms were hardly free of actual scandals. They were just the type of scandals that ruin regular people’s lives, but not the lives of people who wear expensive suits to work in Washington.

Obama helmed a presidency bankrolled by Wall Street donors that refused to prosecute a single banker who engineered a financial crisis that destroyed millions of lives.

He turned promises of significant health care reform into legislation that included a few positive consumer protections, but also enriched and strengthened the power of private insurance companies and dropped a promised public option.

He acknowledged the threat of climate change, but then publicly demanded credit from the fossil fuel industry for helping boost oil production during a climate apocalypse.

He pledged to walk picket lines if workers’ union rights were under attack, but then he promptly walked away from promised labor law reform. 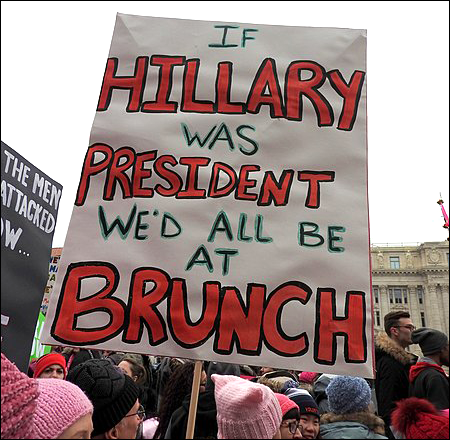 And yes, Obama’s administration slow-walked the response to the environmental catastrophe in Flint, Michigan.

That refrain represents a longing that has pervaded Democratic politics in the Trump years, embodied by the now-infamous protest signs insisting that “if Hillary was president, we’d all be at brunch.”

However, Obama’s Flint speech went further. Echoing a previous refrain from Democratic Sen. Michael Bennet, it was a call to resurrect Brunch Liberalism whereby large swaths of the American left disengage and defer in much the same way it did during the Obama administration, to disastrous effect.

Though it is now forgotten history, the history is clear: After years of mass protest and activism against the George W. Bush administration, many liberal activists, voters and advocacy groups went to brunch after the 2008 election, fell in line and refused to pressure the new administration to do much of anything. Those that dared to speak out were often berated and shamed.

In touting a presidency we don’t have to think much about, Obama conjures the notion of a Democratic administration once again insulated from pressure from an electorate whose poorer populations are too busy trying to survive, and whose affluent liberals are thrilled to be back at Sunday morning brunch after watching an MSNBC host reassure them that everything is All Good.