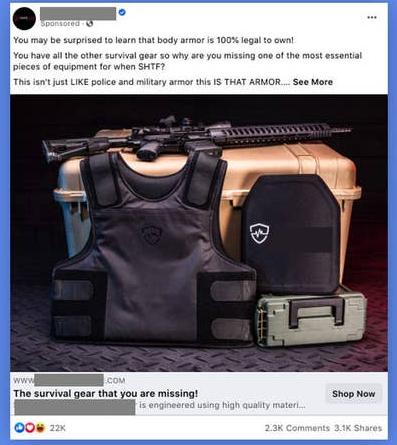 Have you heard the one about Facebook showing ads for military gear next to posts calling for an insurrection?

Nope, this is not a joke.

Zuckerberg’s Horror is actually doing this.

The employees have flagged this since the lynch mob stormed the Capitol, and Facebook has done ……… Nothing:

Facebook has been running ads for body armor, gun holsters, and other military equipment next to content promoting election misinformation and news about the attempted coup at the US Capitol, despite internal warnings from concerned employees.

In the aftermath of an attempted insurrection by President Donald Trump’s supporters last week at the US Capitol building, Facebook has served up ads for defense products to accounts that follow extremist content, according to the Tech Transparency Project, a nonprofit watchdog group. Those ads — which include New Year’s specials for specialized body armor plates, rifle enhancements, and shooting targets — were all delivered to a TTP Facebook account used to monitor right-wing content that could incite violence.

Beginning last summer, the Mark Zuckerberg–led company banned pages, groups, and accounts belonging to US-based militant groups, “boogaloo” extremists, and those associated with the QAnon mass delusion. But members of those movements quickly found ways around the company’s policies by renaming their pages or using code names. They continue to proliferate, organize, and advertise on the social network.

These ads for tactical gear, which were flagged internally by employees as potentially problematic, show Facebook has been profiting from content that amplifies political and cultural discord in the US.

In related news, water is wet.

I don’t know how you regulate this sort of crap, but if there is a potential to profit from extremism, Facebook will be there.