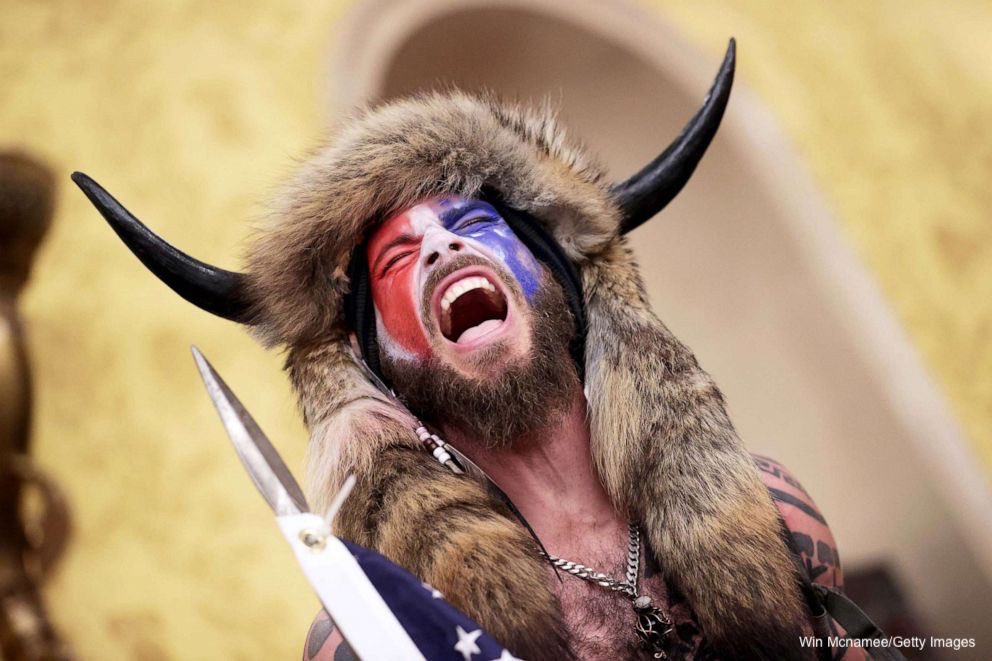 The Republicans will make sure that the Senate impeachment trial as lengthy and involved as possible, so you know that they will insist on a complete slate of witnesses and exhibits.

Well now, the Q-Anon Shaman guy is offering to testify against Trump.

If we were to put his testimony up on pay-per-view, we would pay off the federal debt:

Al Watkins, a lawyer for accused Capitol rioter Jacob Chansley, is offering his client as a witness in the upcoming Senate impeachment trial of former President Donald Trump. Chansley is better known in popular culture as the “QAnon Shaman” or, as Watkins called him, the “guy with the horns and the fur” who was photographed raiding the U.S. Capitol Complex on Jan. 6.

The Associated Press reported on Thursday that Watkins “said it’s important for senators to hear the voice of someone who was incited by Trump.”

When asked whether he was offering Chansley’s testimony against Trump in the Senate with hopes of leniency, Watkins told Law&Crime via email that the answer “is a loud ‘no.’”

In that appearance, Watkins said Trump’s “hyperbole” and “innuendo” resulted in the attack on the Capitol which left five dead, including a Capitol Police officer. Two other officers who were at the Capitol that day have since died by suicide.

Chansley stands indicted by a federal grand jury of six counts, namely: civil disorder; obstruction of an official proceeding; entering and remaining in a restricted building; disorderly and disruptive conduct in a restricted building; violent entry and disorderly conduct in a capitol building; and parading, demonstrating, or picketing in a capitol building. The FBI caught him after he was photographed in the Capitol and identified by the press.

We know that there are not 13 Republicans who will vote to convict, so you want to be sure that as many people as possible watch them put their tongues up Trump’s ass.

Having this clown testify will be must see TV.

Make the Republicans defend the indefensible in front of millions of people.