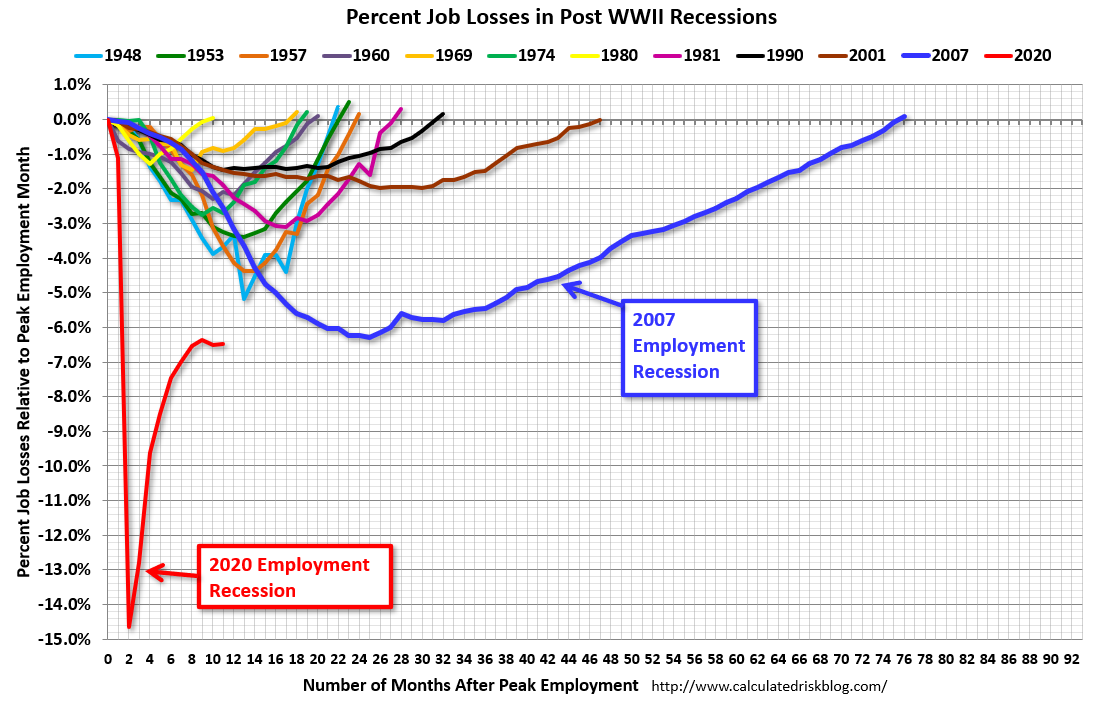 The scariest jobs chart ever

The January jobs report came out, and the word is anemic.

The unemployment rate fell, but only because fewer people were actively looking for work, and the non-farm workforce only grew by 49,000.  (About 150,000 a month is necessary to maintain employment levels)

U.S. employers resumed hiring in January, but the weak pace of job gains suggested a long road remains for the recovery.


“The recovery is only stumbling along at this point,” said Sarah House, senior economist at Wells Fargo Securities. “Yes, we managed to eke out a gain, but we’re still 9.9 million jobs shy of where we were back in February” of last year before the pandemic hit hard, she said.

Jobs grew strongly in business and professional services, mainly in temporary help roles, the Labor Department said in its January report on U.S. employment. Many sectors, though, lost jobs last month. The leisure and hospitality sector shed 61,000 jobs, following a steep decline of 536,000 in December. Retailers and warehouses cut jobs in January after adding jobs strongly over the holidays.

The unemployment rate decline in January was driven by two factors. More people dropped out of the labor force—meaning they weren’t actively looking for a job and may have grown frustrated with their employment prospects. Also, the number of people reporting themselves as employed increased, consistent with a generally upward trend in hiring since last spring.

The broader economic recovery stalled significantly this winter. Unemployment claims, a proxy for layoffs, have remained above pre-pandemic levels. Consumers cut back on spending, as some were wary of leaving their homes as virus cases surged. Others wanted to shop and dine out, but had limited options.

Companies might struggle to find workers in part because the share of people seeking work remains depressed. The labor-force participation rate was 61.4% in January, down from 63.3% in February 2020, before the virus hit. Some people aren’t looking for work out of fear of contracting the virus. Others are burdened by increased child-care responsibilities or discouraged by limited job opportunities.

Many workers are facing long spells of unemployment. Just over four million people were out of work for 27 weeks or longer in January, the Labor Department said, compared with nearly 1.2 million a year ago. Others who lost their jobs earlier in the virus crisis have regained employment, but at much lower wages.

This is why the Biden administration is running around with their hair on fire to get the stimulus package out.

This is why I continue to invoke the undead felidae with a high coefficient of restitution.