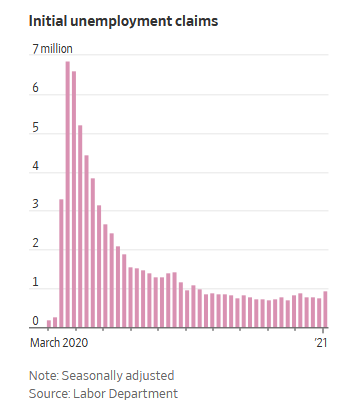 Initial jobless came out today, and it was pretty fucking awful, with jobless claims rising by 181,000 to 965,000 initial claims.

The stimulus has run its course, and the dead cat bounce has begun its downward path:

The number of workers filing for jobless benefits posted its biggest weekly gain since the pandemic hit last March and the head of the Federal Reserve warned the job market had a long way to go before it is strong again.

Applications for unemployment claims, a proxy for layoffs, rose by 181,000 to 965,000 last week, the Labor Department said Thursday, reflecting rising layoffs amid a winter surge in coronavirus cases.

The total for the week ended Jan. 9 also was the highest in nearly five months and put claims well above the roughly 800,000 a week they had averaged in recent months.

The U.S. labor-market recovery stalled last month with the December jobs report showing the U.S. lost 140,000 payroll positions. The economic recovery’s slowdown has included weakness in household spending, though economists expect the economy to rebound later this year as a Covid-19 vaccine is distributed through the population.

But the increase in unemployment claims is another sign that the economic recovery is, at least for now, sputtering, as Covid-19 infections hit record levels nationwide.

On a political note, this is a pretty good indication as to what a bad idea it is to play nice with Republicans over a stimulus package.

They are philosophically opposed to fixing this, and they are politically inclined to focus exclusively on taking down a Democratic President.

When you are being chased by wolves, don’t stop to bake them a cake.