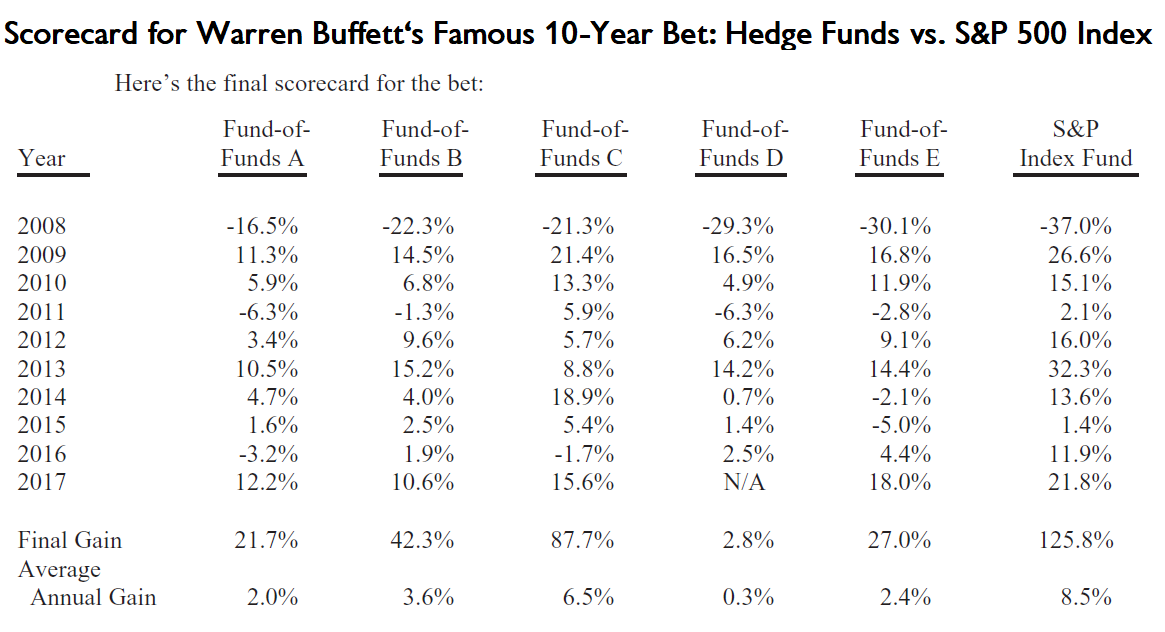 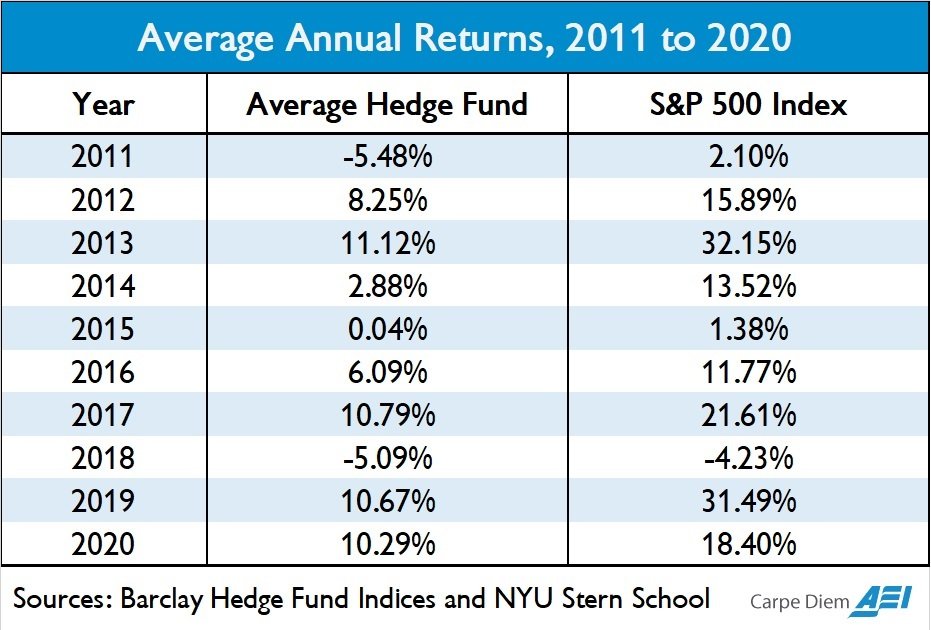 Given that rich Wall Street pigs are a major funding source, I am surprised that the American Enterprise Institute has published a study that the S&P 500 index has out-performed hedge funds by about an factor of five.

When one considers the fees, 2% of the fund +20% of the gains, it’s clear that, absent possible tax evasion and money laundering, hedge funds are a sucker bet:

In 2007, Warren Buffett entered into a famous bet that an unmanaged, low-cost S&P 500 stock index fund would out-perform an actively-managed group of high-cost hedge funds over the ten-year period from 2008 to 2017, when performance was measured net of fees, costs, and expenses. See previous CD posts about Buffett’s bet here and here. In Warren Buffett’s 2017 annual letter to shareholders (released on February 24, 2018), he summarized the result of his bet in the section “’The Bet’ is Over and Has Delivered an Unforeseen Investment Lesson” as follows:

Last year, at the 90% mark, I gave you a detailed report on a ten-year bet I made on December 19, 2007. Now I have the final tally – and, in several respects, it’s an eye-opener. I made the bet to publicize my conviction that my pick – a virtually cost-free investment in an unmanaged S&P 500 index fund – would, over time, deliver better results than those achieved by most investment professionals, however well-regarded and incentivized those “helpers” may be.

A final lesson from our bet: Stick with big, “easy” decisions and eschew activity. During the ten-year bet, the 200-plus hedge-fund managers who were involved almost certainly made tens of thousands of buy and sell decisions. Most of those managers undoubtedly thought hard about their decisions, each of which they believed would prove advantageous. In the process of investing, they studied 10-Ks, interviewed managements, read trade journals and conferred with Wall Street analysts.

Repeat: Most investors will get better financial results over time with with low-cost, unmanaged index funds than from high-cost actively managed stock funds and hedge funds run by highly-paid investment professionals, however well-regarded and incentivized those “helpers” may be.

MP: To get started following Warren Buffett’s investment advice, if you haven’t already, you can open an account in the Vanguard 500 Index Fund Admiral Shares with a minimum investment of $3,000 and the expense ratio is almost zero — only 0.04% (1/25th of one percent) or only $4 per year for every $10,000 invested!

I’ve been saying this for years, but I did not expect this from the corporate drones at AEI.