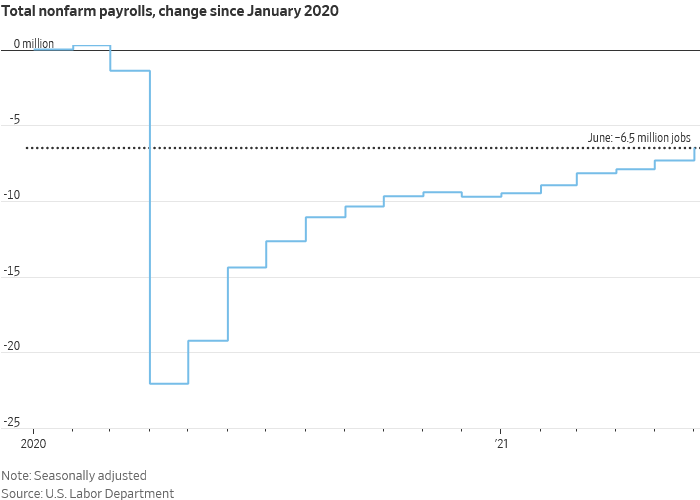 One fly in the ointment though, long term unemployment numbers continued to rise:

The U.S. labor market recovery is accelerating after a spring lull.

The unemployment rate, derived from a separate survey of households, rose to 5.9% last month from 5.8% in May. That was in part because of a positive development: A modest number of Americans came off the sidelines and entered the job search, expanding the labor pool. A broader measure of unemployment that takes into account workers stuck in part-time jobs and those too discouraged to look for work fell sharply last month.

Job growth lagged behind broader economic growth earlier this spring, with the economy adding 583,000 jobs in May and 269,000 in April. But big hurdles to hiring are starting to clear away. Rising vaccination rates, easing government restrictions on businesses and the expiration of unemployment benefits in many states are stoking the latest growth.

That last phrase is a bit of editorializing by the writer.  There is still no evidence that extended unemployment benefits are keeping people off of the job markets, but it’s dogma at places like the WSJ.

We are still not over the hump.