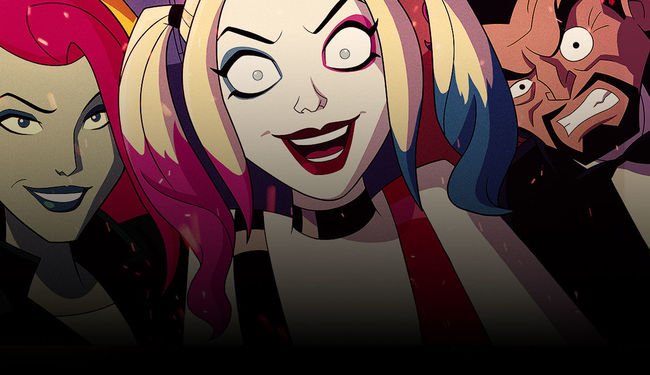 I will attempt to keep this this review as spoiler free as possible, but there will be a few inevitable spoilers, you have been warned.

This series is a telling of Harley Quinn’s transition from sidekick to super-villain after her split with Joker.

You can (at least until June 1) stream it online at Syfy.com, at least if you have a cable account. (see the link)

I have enjoyed what I have seen this far, I am very impressed.

Kaley Cuoco, who plays Harley, gives what her is arguably her finest performance to date.

She puts the “fun” in dysfunction, and plays Quinn as a whip smart and thoroughly broken ingenue.

The best performance though, is Lake Bell as Poison Ivy, who completely steals the show as the self-described eco-terrorists.

She is deeply devoted to Harley (I ship them so much), and she has a remarkably clear view of reality, except for the whole insane toxic pheromone criminal plant lady thing.

Alan Tudyk as Clayface (and  the Joker, Calendar Man, Doctor Trap, Condiment King) is a revelation. (He is a leaf on the wind, watch as he soars)

His, and the writers’ vision of Clayface as the ultimate theater dweeb overeager actor is truly inspired.

All of this is wrapped in witty, completely irreverent, and thoroughly profane (S-Bomb, and F-Bomb, though the (spoiler) C-Bomb is bleeped) plotting and dialogue.

There are some problematic bits in the scripts though, particularly the fact that they occasionally traffic in Jewish stereotypes, particularly during the (spoiler) Cobblepot bar-mitzvah, and the character of Sy Borgman, and (spoiler) Harley’s parents.  (Who knew that Quinzel was a Jewish name?)

This is a joyous roasting of super-hero culture, while also being a profoundly feminist narrative.

I recommend this highly, and rate it 8⅔ out of 10.